“ Oh, I’m sorry. Did I break your concentration?”
The nineties for me was my, “You have the whole world in front of you” time. I had just graduated from High School and was looking forward to finding what life had in store for me. With so many life decisions ahead of me, I often looked to free my mind with music and film. This was the time that birthed the Indie film moment, where names like Tarantino, Smith, and Rodriguez were introduced to us and Spielberg and Scorsese were at the top of their games. With so many great movies,the question becomes what are the ones that can be watched over and over again? Well we here at The Cine-Men have you covered, as we present to you with the nine most re-watchable movies of the Nineties.

2. “Fight Club”
Is there any film that personifies the twenty-somethings of the nineties more than “Fight Club”? Everything about this movie just felt right, from Norton’s performance of a guy who is trying to make his life complete, to Pitt, who as Tyler Durden plays a character that will go down in infamy. Based on the novel of the same name by Chuck Palahiuk, “Fight Club” showed us how some young men dealt with life, but then again, I am not suppose to talk about it. 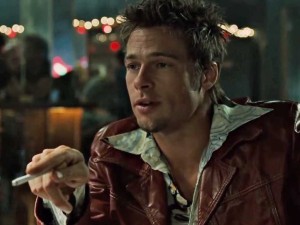 3. “Saving Private Ryan”
World War II has provided us with stories for the last seventy plus years, but no story has had the impact like “Saving Private Ryan”. Watching the landing on the beach was an experience that I haven’t had ever in a movie theater. Tom Hanks leads a group of soldiers whose mission is a man, who is the last of four brothers who died in battle. This story and movie never gets old, and to this day remains a powerful piece of filmmaking.

4.“The Shawshank Redemption”
This is the story of how one man crawled through a river of shit for his freedom. Andy Dufresne, like every man in Shawshank prison is an “innocent” man, we follow Dufresne as he serves his time with the help of a man who can get things. Prison is something most of us won’t experience, but with this movie, we get a taste of life on the inside. 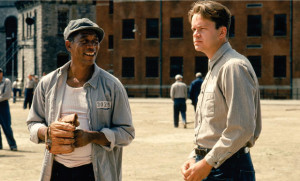 5.“Galaxy Quest “
You know you made it, when someone starts to make fun of you, because flattery will get you everywhere. Mel Brooks did it to “Star Wars” with “Spaceballs” and now it is “Star Trek’s” turn, as “Galaxy Quest” is the perfect counter. It tells the story of a popular Sci-Fi TV series where the cast still lives off it’s past glory. That changes when a group of aliens take what they learned from the show and enlists the crew to help them save their race, only this time it’s for real.

6. “The Big Leboski”
The Coen brothers are masters as pretty much everything they do. They are like that hitter that would rather have a triple or double than a home run, but end up hitting it anyway. With “The Big Lebowski” they tell the story of The Dude (Jeff Bridges) who is mistaken for someone else, and a rug that really tied the room together. This film never seems to get old, thanks to loyal fans, and a story that is as timeless as blowing. 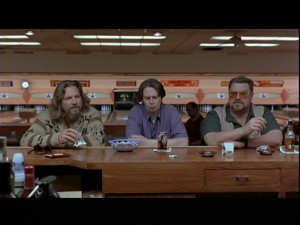 7. “Goodfellas”
Is there a film about the life of being a gangster better than “Goodfellas”? I would say no. The story of Henry Hill and his time living his dream of being among the wiseguys, only to have it all end with him being a regular guy. The movie is magical, with all the stars aligning so that we can have this little piece of Heaven on earth. Wait, do you think that’s funny? What’s funny about it? Like I am here to amuse you? Of course I am.

8. “Pulp Fiction”
In 1994 the world of movies changed and broke our concentration as Quentin Tarantino unleashed “Pulp Fiction” onto the world. Sure “Reservoir Dogs” was unique and had that great pop-culture dialogue, but they did not reach the level of this film. With the perfect cast, and the perfect nonlinear storytelling, this movie launched Tarantino to elite filmmaker status, and gave us a film we never get tired of. 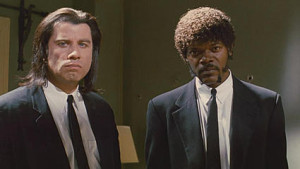 9. “Toy Story”
As children many of us played with toys and used our imagination to bring them to life. We would rescue the princess or have found our dream house; whatever it was, all it took was your mind and the love of your toys. What if though when you were done playing, your toys came to life and lived to be there for you. Pixar answered that question for us, as a Sherriff, a space cadet, and every toy you grew up with show what it means to find a friend for life.