Who ever said that had no idea what they were talking about. Video games over the years have become mini movies as they have taken the cinematic approach. Games like “Uncharted” are almost like a movie that you have control of, which is a long way from the days of playing Pong. Not there was anything wrong with play Pong, something I spent hours doing, but I don’t think people will be lining up for “Pong:The Movie”, of course it can’t be any worse then “Double Dragon.” I digress, I am not here to make a list of all the video games that didn’t work as a movie, instead I want to tell you what I think are the ten best, so without further ado.

10. “Super Mario Brothers”
“Hello it’s me, Mario”, sure this movie about as good as Koopa keeping the princess captive, but come on, it Super Mario Brothers. Nintendo and everyone’s favorite plumber ruled so many childhoods it would be hard to make a list like this and not have them on it. Sure it’s cheesy, but with Bob Hoskins as Mario and John Leguizamo as Luigo I am in it to save Princess Daisy once again. 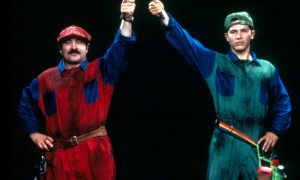 9. “Silent Hill”
Games like this look like their transition from your TV to a movie theater would be easy. While they got the looks right, they should have taken a cue from the films name and just gone silent. Still though with so many bad movies from video games, this film, about a woman who takes her adopted daughter to the town of Silent Hill makes the list by default.

8. “Need For Speed”
“ I feel the need, the need for speed” In my dreams this popular video game series name was deprived from that famous line from “Top Gun”. In reality it has nothing to do with that, and everything with fast cars. Aaron Paul stars as a street racer who, wait for it, sets off on a cross-country race to avenge his friend. With some great cars, and hey that “Fast and Furious” movies seem to work, and this works just as well, minus Vin Diesel of course.

7. “ The Angry Birds Movie”
This makes the list because it’s funny, looks good, and because I really don’t want to make these birds any angrier by not putting on this list. Who am I kidding, these birds aren’t real, and instead they are on the list just for the entertainment factor. Sure a movie about a bunch of birds doesn’t sound appealing, but if it worked for Hitchcock, why not now. With some envelope pushing and some clever gags, “The Angry Birds Movie” works pretty well.

6. “Laura Croft: Tomb Raider”
Here is another game that sounds like would be a easy translation to the big screen, and it is. Take a bad ass that is into recovering things, see Indiana Jones, and have them obtain it before the bad people do, and you got my money. If all that didn’t work already, Angelina Jolie as Laura Croft equals perfect casting for this semi fun movie that we enjoyed back in 2001.

5. “Max Payne”
Another game that felt like a movie as much as a game. The move is about Max (Mark Walberg) as a cop and his trip into the criminal underworld to find the person responsible for the death of his wife and child. The film feels like the video game, which is good in my books. Being one of my favorite games to play, I was glad they didn’t go and mess it all up.

I know what you are thinking why the sequel, and not the original? Well first off this is my list, and second I think it is better. 47 is an “agent” who is a genetically-enhanced supercoiled trying to find the father of a girl named Katia. Fans of the game and movie know the twist coming there. As for the film, its simple approach works for both the first and second, as this is one game you will like playing.

3. “Resident Evil: Apocalypse”
By far the most successful series of films based off a video game. Not only in dollars, but is quality as well, as they were on the zombie train early. Milla Jovovich plays a woman who just seems to kick a lot of zombie ass, as she tries to save Raccoon City, for the terrors Umbrella has unleashed in this world.

2. “Mortal Kombat”
If seeing your favorite fighters, Liu Kang, Johnny Cage, and Soyna Blade isn’t enough to get you excited, add a soundtrack that gets you pumped is sure to. I am sure this movie from 1995 does not hold up well, but at the time it was the bees knees. I for one still like taking the trip down memory lane when are fighting movies were simple , both in script and story, all to a killer soundtrack. 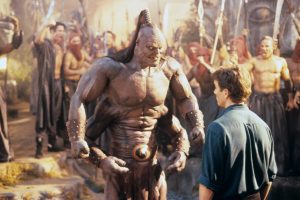 1. “Prince of Persia: The Sands of Time”
So here we are, at number one, a movie that would make very few top ten lists, but is the best of this one. Staring Jake Gyllenhaal as Prince Dasten who has a dagger that enables him to travel in time. Once again the movie keeps the feel of the popular games that it is based on, and keeps if fun as well, which is all the reason to be number one on this list.