Big– He captured my heart in “Splash”, or more likely it was as Uncle Ned in “Family Ties”, but in 1988, with his performance as Josh Baskin, a boy who grows to an adult overnight is incredibly fun and touching. It was also where I was able to relate to him, not as a guy who falls for a mermaid, but a kid who got to work at a toy company, but also see the grown-up problems that are waiting for all young boys.

Best Scene– When he has to prove that he’s Josh to Billy, and sings their made up song. Equally great is when Billy cusses at him and Josh tries to get mad like a grown up, but Billy reminds him who he is.

Forrest Gump– This is where Hanks took off as a performer, in 1994 on a streak of performances that lasted until the early 2000’s. For sure it started with the Oscar from “Philadelphia”, but Gump for me was a difficult character to crack, all he had to do was lean too far in one direction or the other and it would not have been as memorable a film as it was. He created an icon in film history, in a movie that is endlessly re-watchable. 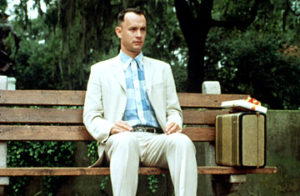 Best Scene– Too many to even count, but if I have to choose, is when he’s faced with Little Forrest and asks in the most heartbreaking way if he is smart or is he… That gets me every single time. The look on Hanks face, and the level of self-awareness is just something that can’t ever be scripted.

You’ve Got Mail– This one, won me over with the countless times my wife would watch it, and I loved “Sleepless in Seattle” so I gave it a chance, mainly because of Hanks, only to really dig the writing of Nora Ephron. Much like “Sleepless” which had the couple never really meeting, “Mail” had the couple meet on-line, fall in love but hate each other in person. Not 100% original, but Hanks along with Meg Ryan totally pull it off in their sweet and charming ways. 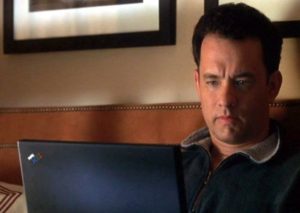 Best Scene– When Hanks and Dave Chappelle are outside the coffee shop about to meet the woman Hanks has been messaging with only to find out, it’s Ryan who despises him. His reaction to her beauty is hilarious, and his interaction with her is incredible when he attempts to do the impossible of showing her that he is the one for her.

Saving Private Ryan– I remember all those comparisons in the 90’s with Hanks and Jimmy Stewart, never was it more apparent than in this film. Where he is a likable everyman in a extraordinary situation as all men and women of that war were, he just exuded a level not seen before, one of a leader and always in control, always knowing what the right move was. Until he didn’t know, and the humanity of the role seeps through all the way to the final scenes of this Spielberg masterpiece. 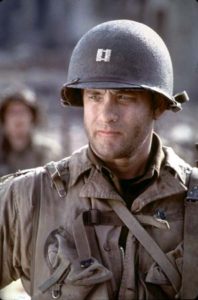 Best Scene– The monologue Hanks gives when the men are arguing over wether to have killed the captured German soldier. His confession of where he’s from and what he did before the war with the brilliant cap of if finding Ryan so he can get home to his family, if it earns him the right to see his wife again, then that is his mission. Brilliant performance.

Toy Story– It’s difficult for some actors to really stand out in a purely vocal performance. But in this landmark animated masterpiece Hanks proved that he doesn’t even need to be on screen to turn in an outstanding performance as the insecure but lovable sheriff doll Woody.

Best Scene– Is by far the argument at the gas station when Woody realizes he’s a lost toy. And his immediate blame of Buzz, it completely covers the emotional spectrum, from sadness, to humor, to heart, all the while you never even see Hanks, just his voice along with a computer created image.

Honorable Mentions- Splash, The ‘Burbs, A League of Their Own, Sleepless in Seattle, Philadelphia, Road to Perdition, Catch Me if You Can