I spoke to my dad recently and asked him what the first movie he and I watched together, he said he wasn’t too sure, but that “…it probably had a cowboy in it.” The western was a staple in my household from as far back as I can remember. Mostly the shows of the time were the reruns of Bonanza, The Wild Wild West, and Gunsmoke. My dad watched them all, most of my early memories are of me relaxing with him on our couch, while a small black and white screen with the sound of gunfire coming from it held our gaze for what seemed like hours.

As a young boy there is no better place to be trapped than in a world of black and white hats, fist-fights, horses, and trumpets sounding the triumphs of our weekly hero. Remember, there was no Star Wars yet. “Jeremiah Johnson” aired as the Sunday Night movie in 1976, he said he remembered watching that on TV, so while that may have not been my first film, it had to be my first introduction to the Western. Which is a great one considering that “Johnson” is not your typical western. It has the setting and certain troupes, but more akin to “Dances With Wolves” a film I don’t really consider a traditional Western even though is also shares similarities to what makes a Western.

The films I consider my favorites usually have cowboys taking part in very cowboy acts. Yet when they tend to divert form from the typical shoot-em-up Western and become something more makes them stand out, though not  in the same way Sydney Pollack and Kevin Costner’s version of a Western did, where those films transcend the genre in a unique way, the films on my list stand shoulder to shoulder to black and white classics like “Red River”, “Shane”, and “High Noon” that explore similar themes.

Also just to be clear, this could easily have been a Top 50 Westerns piece, because I love this genre so much. With great films left off the list such as “Lonesome Dove”, “The Magnificent Seven”, both versions of “True Grit”, both versions of “3:10 to Yuma”, “Big Jake”, Rio Bravo, “Open Range”, “The Proposition”, “Stagecoach”, “The Shootist”, “The Assassination of Jesse James by the Coward Robert Ford”, and on and on, and I haven’t even mentioned outlines like, “The Hateful Eight”, “Blazing Saddles”, “Maverick”, “The Quick and the Dead”, and classics still such as “The Treasure of the Sierra Madre” and “The Cowboys”. See there I mentioned over twenty great films and I haven’t even gotten to the list yet, so before this turns into a novel, here is my Top Ten Westerns!

Silverado– This is still a great time in the west, by film legend Lawrence Kasdan. With a seller cast and a classic story of a small town with a corrupt sheriff, memorable gun play, and the importance of a cowboy’s hat, this one still makes me smile every time I watch it.

Tombstone– In by far the best re-telling of the events that led up to the legendary gunfight at the O.K. Corral, this   film with an incredible duo of Val Kilmer as Doc Holiday and the always enjoyable Kurt Russell as Wyatt Earp. Again a stellar cast helps carry this film into the realm of the classic with clever dialogue, fantastic stares, and phenomenal showdowns. It is truly a masterpiece. 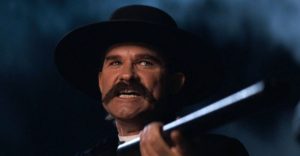 “HELL’S COMING WITH ME!”

The Searchers– Speaking of classic, while Clint Eastwood has three films that he stars in on this list, that should never take away from the icon that is John Wayne. Someone who could very well be the image of what children of the future see when they want to know what a cowboy looked like. This film was bold and dark for 1956, Wayne’s character Ethan Edwards shooting out an Indian’s eyes after he’s dead, because of belief that he doesn’t even share? That hit me hard when I first saw it, though nothing like the epic ending, and even more iconic final shot which to this day is still ripped-off or paid homage to, depending how you look at it.

Once Upon a Time in the West– Nothing though gets darker than the themes explored in Sergio Leone’s film which has assassin’s, brutal bloodshed, and the murder of children in this unrelenting 2 hour and 55 minute ride in a west so hot, you sweat just watching. Plus you get Henry Fonda in a role as evil incarnate, that is something to behold, and I I truly love that Charles Bronson creates his own soundtrack in the film with his harmonica.

Butch Cassidy and the Sundance Kid– As far as duo’s go, there is no better gunslinging pair than Butch and Sundance. Robert Redford, and Paul Newman turn in spectacular performances as bank robbers that get in over their head and leads them on the longest and furthest chase in movie history. Filled with now classic moments, like a music montages, the cliff jump, and my favorite, the train car explosion this film is a blueprint for what a Western should be. 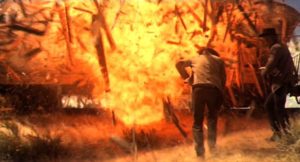 The Good, the Bad, and the Ugly– 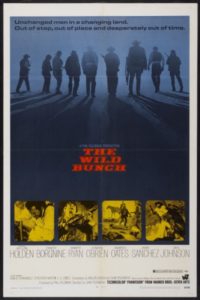 The Man Who Shot Liberty Valance–

“No, sir. This is the West, sir. When the legend becomes fact, print the legend.”