Since Disney has discovered the new money coming in for old properties, there is no stoping them now. Starting with “Cinderella”, “The Jungle Book”, and the latest being “Beauty and the Beast” these animated classics are working just as well if not better as live action films. Even if most of them have a good percentage of computer animation. With the famed hits of the 90’s in “The Lion King”, and “Aladdin” on the way, here is a list of Disney animated films I would love to see get the live-action treatment.

1) Pinocchio– One of the original classics from Disney’s early catalog is ripe for a re-telling. The story of a puppet who wants to be a real boy with the help of his cricket conscience, Pinocchio goes to a crazy fun land where kids transform into donkeys and ends with a great battle with a huge whale.

2) The Sword in the Stone– Even though the story of King Arthur has been done ad nauseam, this along with the already live action “Excalibur” are two of my favorites. Mostly for the constant transformations into animals by Merlin and young Arthur in an attempt to teach the boy about life and the world. And the best reason to see this once again on the big screen is the epic and hilarious wizard duel between Madam Mim and Merlin. 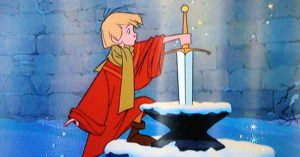 3) The Rescuers– This cute but daring adventure of a pair of mice who’s job it is to rescue abducted children is put to the test as they go up against a group of bungling criminals in search of a valuable diamond. With some excellent set pieces a cute little girl and some classic voice casting this could be good enough to go back to Australia for the sequel again.

4) The Fox and the Hound– This one made the list because of it was probably the first animated film that made me cry. A tale of two unlikely friends who grow to be pitted against each other by what should be their nature as well as their surroundings. Not much in the way of action here but all they need to do is make the relationship work and it would make this not-so-classic one to remember. 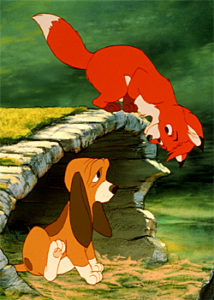 5) The Black Cauldron– One of the rare Disney films that didn’t have singing and dancing throughout, this would fit perfectly in the weary YA adaption overload. A young farm boy thrust into an adventure with furry friendly sidekick, a magical cauldron, a dark villain and of course a not-so-damsel in distress. This has all the troupes that still work, even with today’s modern audience, just as the still vibrant Star Wars franchise.