The Empire Strikes Back-
“The Jedi master who instructed me.”

My first memory of seeing Star Wars on the big screen was not “A New Hope”, (called just Star Wars then) though my parents did take the 2 year-old me I have no memory of seeing it. It was Empire that made its first impression on me, and was my first real introduction to the Star Wars universe. We went to the Northwest theater to an evening screening. When we got there the first image I saw was Luke hanging upside down in the Wampa’s cave reaching for his lightsaber. Because we got there late, my parents waited until the end of the credits and stayed until the next screening to see the first 10-15 minutes we missed. I was so excited by the Millennium Falcon in the asteroid field, and Luke and Vader’s lightsaber battle, only to then see the impressive opening crawl, my little mind was blown and my heart belonged to the Force.

My First Lightsaber-
“An elegant weapon, for a more civilized age.”

Of course the most sought after piece of Star Wars merchandise for me as a kid, besides one of every figure made, and ton of Stormtroopers was a lightsaber. They came out with a plastic one with glow in the dark blade that made the ‘woom’ noise when you swung it, the faster you swung the louder the ‘woom’. Never could one feel more like Luke Skywalker than wielding the weapon of the Jedi. 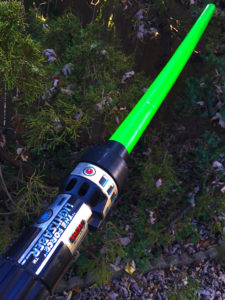 Star Wars Figures-
“Judge me by my size do you?”

Every boy in the 80’s had Star Wars figures. We would bring them to school, play during recess, all swearing we knew a kid in our neighborhood who’s Boba Fett figure launched his red rocket into the kid’s mouth and choked on it. That was why we didn’t have one of our own. Every relative knew when our birthdays would come around they would call parents and ask which Star Wars mono (hispanic word for ‘little men’) we didn’t have yet. Acting out scenes from the movies with your figures was the ultimate in fandom at the time. 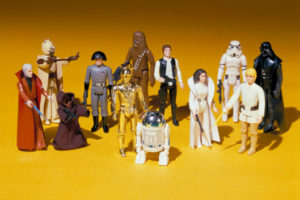 The Phantom Menace Trailer-
“Every Saga has a beginning.”

In 1998, it had been over a decade since there was a new Star Wars anything. Sure, there were books, and games, a new legion of toys, but nothing else that told more adventures of our favorite characters. There had been rumors of another series of films that told the origin of Darth Vader and his journey towards the darkside. The internet was in its early days but the day finally came when it was certain there was going to be three new Star Wars films. The first trailer was going to be shown before and interestingly enough after the credits of two films: “Meet Joe Black” and “The Waterboy” I chose the shortest to the two films electing to see “The Waterboy” three times in the theater. Despite how the Prequels turned out, I still love the Episode I trailer, I still remember that sense of awe at seeing Ewan McGregor as the young Obi-Wan wielding a lightsaber. The POV of the podrace. Darth Maul’s dual lightsaber before he take’s on two Jedi. And of course, the epic John Williams score that still has the power to give goosebumps.

The best thing about Star Wars is and was its ability to spark imagination. The characters, the history, and the world. The conversations it would bring about hours of speculating of the origins and motives behind the characters actions. I clearly remember talking Star Wars with elementary school friends up to being over 30 years old and reflecting on the true nature of the Force, and what a true balance is. I remember getting with a friend to write a 25 page treatment of what the prequels could have been. This epic story of riches never fails to impress me every time I revisit it, whether it was with the re-releases in 1997, or with my kids as they saw the original trilogy for the first time. Star Wars is always there and thankfully, will continue long after I’m gone, and the future generations will never stop discovering that far away galaxy from a long time ago. 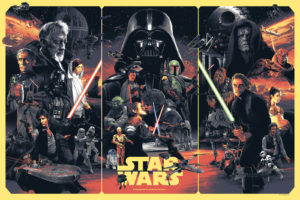