Halloween is upon us and aside from the free Twizzlers and peanut M&M’s and needing very little prompting to dress up like Indiana Jones there is always one of the best things about this time that should warrant a genuine holiday, is of course, the movies!

Fortunately now it’s easier than ever to catch horror movies due to the epic ton that are streaming on the Netflix, Amazon Prime, and Hulu’s available to us. It’s glorious because anything you hear is good is readily available with a click of a remote, but we are also flooded with choices across all the streaming services. What to see, what to see.

So we decided to give you some options based on what horror mood you are in on those late nights, or throwing a party and need some background scares, also if you’re like me, something the kids can sit through without having to discuss the trauma to their therapist twenty yeas from now when their spouse keeps wondering why they sleep with the lights on and lock on the closet door.

It Follows- (Netflix) With a genius premise that rivals “A Nightmare on Elm Street” and fantastically simple scares, it’s easy to look past some of the cheap visual effects to see the true gem of a horror movie that this is.

Gerald’s Game- (Netflix) With solid acting and that Stephen King creepiness, this is a small scale horror film that delivers, even if it goes a little long by the end. Still has some scary stuff including probably the most uncomfortable conversation scene I’ve seen in years.

The Babadook- (Netflix) The true movie-version of birth control, this is a old-fashioned fright fest with a spooky monster and the horrors of parenthood.

Creep- (Netflix) With the tired “found footage” troupe this one keeps it tense with a great lead in Mark Duplass, as he torments a videographer to a shocking ending.

The Invitation- (Netflix) A slow burn of a film that brings about the most awkward of dinner parties, with surprises and tense moments of terror.

The Devil’s Rejects- (AmazonPrime) Not for the faint of heart, or easily disturbed. And still in my opinion, one of the best horror movies of all time. 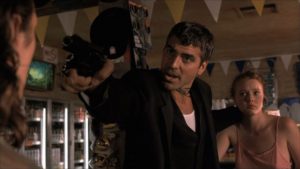 V/H/S & V/H/S 2- (Netflix) A fantastic group of shorts blended together with tons of gore, some clever twists on familiar genre troupes. The highlight is on tape 2 titled “Safe Haven” which is the most batshit insane horror short ever.

Train to Busan- (Netflix) If you’re all zombied out this one will reinvigorate your love for the sub-genre. As the undead wreak havoc on the South Korean rails.

From Dusk til Dawn- (Amazon Prime/Hulu) Half kidnapping thriller, half vampire gore-fest, this Robert Rodriguez/ Quentin Tarantino joint is still great to watch and to listen to. “Did they look like psychos? They were vampires! Psychos do not blow up when sunlight hits them, I don’t give a f*@# how crazy they are!”

The Monster Squad- (Hulu) Only slightly dated, this kids vs. monsters flick has heart, humor, and Wolf-Man nards. What else do you need? 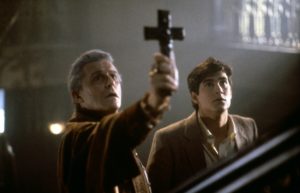 The Sixth Sense/ Signs/ The Village- (Netflix/Hulu) The Shyamalan triple threat still holds up as a boy sees dead people, a family fends off aliens and a blind girls battles woodland beasts. And hey, there’s a twist.

The Host- (Netflix) A truly unique creature feature by Bong Joon-ho straddles the line between horror and tension relief laughs in this original classic.

Donnie Darko- (Netflix) Set in the 80’s this is more confusing cool than scary, but there are moments that are creepy enough and still love that bunny.

Fright Night- (Hulu) This super great fanged classic has it all as it sticks to the rules but still has all the charm from both the vampire and the vampire hunter.

The Shinning- (Netflix) It terrified me as a child, and I can only watch it in the daytime now, what else do you need to know? Jack Nicholson with an axe?

Let the Right One In- (Hulu) A modern classic take on the well-known vampire lore, as a boy befriends a young looking bloodsucker. Both this and the American remake are worth a watch.

The Silence of the Lambs- (Hulu) Rarely do you root for both the hero and the creepy as hell villain. But with this Academy Award winning thriller you do. Even more rare is the masterpiece that is as quotable as it is terrifying.

An American Werewolf in London- (Amazon Prime) Still the best werewolf movie of all time. Period.

Coraline- (Netflix) The stop-motion brilliant little film has those eerie button-eyed people and strange world that creeps and entertains both young and old.

Little Monsters- (Netflix) In the peak days of home video, this one managed to make it to our house on a regular basis. With proto-“Monster’s Inc.” elements, it has heart mixed in with the under-the-bed creatures.

The Real Ghostbusters- (Netflix) This classic Saturday Morning cartoon features some great spooky baddies, like The Sandman, Chathuluh, Samhaim, and The Boogieman to name a few. It still holds kids attention despite the sometimes dated animation, with fun storytelling and unique characters.