One thing that has always been a constant in comics is its ability to change. They update with the times, or decide to go back to the way it used to be. Characters transform and the tone shifts as new writers come on and off in superhero titles. Almost all the time this has been done to bring up dropping sales on certain books. Superman comic sales going down? Let’s kill him. Spider-man’s life too complex, let’s have Mephisto wipe it all out and reset Peter Parker’s life. It’s been done this way for decades. Now the Marvel Cinematic Universe has yet to make it to a decade yet, (that will be next year) but it seems they have learned what comics started doing long ago. A title not working? Change it.

This is certainly the choice that was made with the “Thor” film series. Which most recently ended with “Thor: The Dark Wrold”, which was’t exactly forgettable, but it didn’t linger on the brain too long like Captain America’s second time out: “Winter Soldier”. So the geniuses at Marvel decided, hey, since Thor and his fellow Asgardians can travel across the stars from their rainbow bridge, let’s catapult them to the most fun corner of the MCU. The crazy-space inhabited by The Guardians of the Galaxy!

Thor (Chris Hemsworth) has returned to Asgard after adventures with the Avengers and a failed search for the Infinity Stones. He finds his trickster brother Loki (Tom Hiddleston) ruling their homeworld under the guise of their father Odin (Anthony Hopkins). Once he is revealed, the brothers are faced with a woman from Odin’s past come back to rule Asgard. Hela (Cate Blanchett) arrives and manages to banish the brothers into unknown territory on a planet called Sakaar ruled by The Grandmaster (Jeff Goldblum) who forces Thor to battle his champion The Incredible Hulk (Mark Ruffalo). Soon the pair attempt to escape the planet with the help of Loki and Valkyrie (Tessa Thompson) in order to stop the evil Hela before she remakes Asgard in her own image.

Director Taika Waititi (Hunt for the Wilderpeople) it turns out was the right choice to take the dour mood of the Thor films and give it a James Gunn-type shot in the Asgard. If you’ll pardon the expression. “Thor: Ragnarok” is a hilarious film, and it is a Hulk-size ton of fun. There is that Whedon-esque humor of taking the air out of its villains and heroes alike. The silly posturing is called out and pretty much never lets up. Hemsworth is still a fantastic Thor, with great comedic timing along with Hiddleston’s Loki, Ruffalo and Thompson all of their scenes give a well deserved series of chuckles. Though none come close to the comic brilliance of Jeff Goldblum as The Grandmaster. I guarantee there is like an hour of his insane improve somewhere just begging to be devoured on a Blu-Ray special feature.

Another amazing move by Marvel was along with writer Eric Pearson, they brought actual comic book writers onboard to tackle the script for “Ragnarok” in the team of Craig Kyle and Christopher Yost. They had a lot of experience in the X-Men books, they even contributed to the underrated Marvel Animated films of the mid-2000’s, and were the writers of the awesome “Hulk Verses” where there is a great knock-down drag out between the god of thunder and the green behemoth that rivals the one that happens here.

Which is fitting considering most of “Thor: Ragnarok” feels like a cartoon. Yeah it’s a far turn from the Shakespearian storylines of previous films, but it will fall right inline with the MCU as a whole and I have faith in the Marvel Trust led by Producer Kevin Feige who has yet to let me and hundreds of fans down so far. It’s great to see that Marvel hasn’t forgotten what they are doing here. These are funny-book characters, they deserved to be treated as such, tough and serious one page and wacky in the next. Don’t believe me?  Thor, along with having his heart broken by his father’s lies and his brother’s treachery, also spent time as a frog. 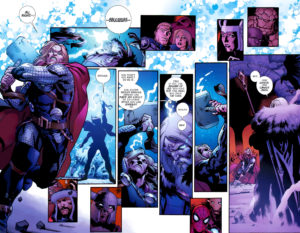 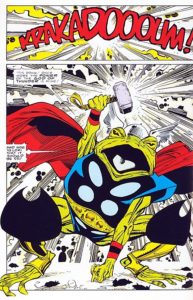