On this edition of “Cross the Streams” we got Batmen, Bad men, and Bolt, along with some cowboys and clerks for good measure. Over on Netflix we got the best two Nolan Batman films with Batman Begins and The Dark Knight, both films still hold up extremely well, and Dark Knight is still unseated as the greatest superhero movie of all time. There is also some great stuff in the time of six-shooters and horses, starting with the kinda cheesy classic Young Guns which now plays more like what the title suggests, a bunch of young stars playing cowboys. Plus if you blink you’ll miss the Tom Cruise cameo as he’s shot and killed near the end of the film. On the other end of the spectrum but still fun is the true western classic Silverado starring Scott Glenn, Kevin Kline, Danny Glover and a baby faced Kevin Costner as they take on the corruption and injustices of the old west. Directed by Lawrence Kasdan and is by far his best film, it has it all and Jeff Goldblum. Over on the animated front there is what I consider the return of great Disney films outside of Pixar, the 2008 film Bolt about a TV show dog (John Travolta) who believes he has powers and is searching for his person Penny (Miley Cyrus) with the help of a street cat (Susie Essman) it’s a road trip with heart, fantastic visuals, and some great gags, and it’s one of Travolta’s best performances. There is also the still hilarious Clerks, the first film by director Kevin Smith, like Tarantino and Sorkin, Smith creates a world with language, even if it’s potty language a lot of the time, it still makes room for lines like “Don’t you have jobs? Get outta here, go commute. You bunch of easily led automatons. Try thinking for yourselves before you pelt an innocent man with cigarettes.” It’s still funny almost 25 years later. The Game directed by David Fincher starring Michael Douglas is a solid thriller with a phenomenal ending. Lastly there is what I consider the actual 4th Die Hard film, if they decided to go edgier, and that’s 2005’s Hostage starring Bruce Willis as a hostage negotiator who has to save one family in order to save his own. With one tense scene after another and a breakout performance by Ben Foster this is one that you should check out if you miss John McClane like I do. 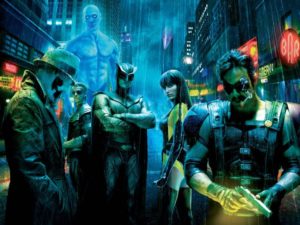 A lot going on for Prime Members in Amazon with some 80’s monster and sci-fi flicks like The Monster Squad as a group of kids face off against Dracula, Frankenstein’s Monster, the Mummy, the Creature from the Black Lagoon, and the Wolfman. It’s still a fun time when our monsters were practical and not CGI. Runaway is a future where thanks to Gene Simmons, robots run amok and only Tom Selleck and his mustache can stop them. This is 80’s cheese at its best written and directed by the great Michael Crichton. Also available is all three versions of Zack Snyder’s comic book epic, Watchmen. You can re-watch the theatrical cut, the longer Director’s Cut, or the 3 and 1/2 hour super dense, super complete Ultimate Cut with the reading of an actual comic book spliced in to give you the feeling of reading this one-of-a-kind comic book experience. Now I know I’m supposed to hate Bryan Singer, and despise Kevin Spacey, but The Usual Suspects is still for me, one of my favorite films of all time. There is also the now classic Children of Men, which if you haven’t seen, you should. And if you haven’t seen it in a while, you should. Green Room, is a tremendous thriller, with solid performances by Patrick Stewart, Imogen Poots, and the late Anton Yelchin. Lastly you can go in the way back machine with Savannah Smiles, I wanted to show this one to my kids, but I warned them this was not a Marvel movie, that this was about a little girl who runs away from home and ends up with criminals with hearts of gold, and that there would be no explosions. Little did I remember, the opening scene is a prison break where the diversion was an explosion. They laughed at me. 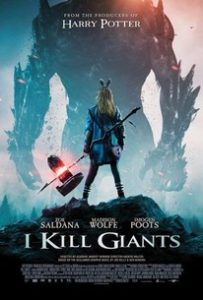 Finally on Hulu, there is the new series Castle Rock a story set in the Stephen King universe, as a lawyer (André Holland) goes back to his childhood town where dark things happen and his past comes back to haunt him. It also stars Melanie Lynskey, Bill Skarsgård, Scott Glenn, and Carrie herself, Sissy Spacek. The fantastic biopic I, Tonya is also available, where it treats the life of Tonya Harding like real life, where everyone tells their perspective and it’s filled with as many lies as it is with truth. Colossal, directed by Nacho Vigalondo is an interesting twist on the big-monster-destroying-a-city movie. Starring Anne Hathaway and Jason Sudeikis, it is genre blending of the best kind. And I have to say it again, you have to, have to see I Kill Giants! it carries the torch of the classic 80’s kids movies like The Goonies, E.T., and Russkies, that’s right Russkies. Look it up, its got a 13 years young Joaquin Phoenix back when he was Leaf.

So check out all these movies, until next time!