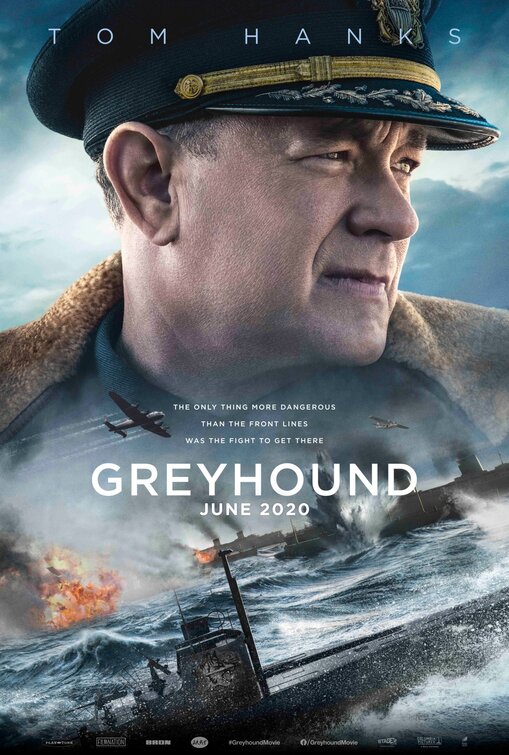 It doesn’t take long in Tom Hank’s new World War II war drama Greyhound for you to know who is in charge. Of course I could be referring to most Hanks’s roles and not just the fact that he is in command of a ship this time, where he is indeed the captain now. Hanks has an enduring passion for stories from the great war and loves to tell them with even this time writing the screenplay from C.S Forester’s novel “The Good Shepherd”. This story takes place on the open waters and with Hanks both staring and writing, it is all hands on deck for this one.

Hanks plays Commander Ernest Krause, who has been given the duty to protect a convoy of ships from America to its Allies in Europe. For a distance close to shore Krause’s ship under the call sign “Greyhound” is provided with air cover, only losing that cover when it when it arrives to an area that is nicknamed “the pit.” Once in the pit the supply ships and Greyhound become sheep for the wolves that are the German U-boats. Greyhound has a few other ships to help in the protection, but she is the big gun and the lead defender as it tries to kill the wolves before they can feast on any of the sheep. Hours feel like days and days feel like weeks as Greyhound tries to survive and protect its flock from suffering a watery grave.

Coming in at a brisk 91 minutes, Greyhound sacrifices character development, but still finds a way to make you care about at least one character. It doesn’t take many guesses to who that would be, as Hanks is really all you need and he takes command of not only the ship but of the screen every time he is on it. Where Greyhound soars is in building tension and as every ship nearly collides and torpedoes are barley missed, what often feels like a underwater game of cat and mouse. I mean sure you could have added thirty minutes and fleshed out some of the crew, but I rather enjoyed the shorter run time, with the action pretty much happening from the get go. The players are less important in this instance than the story itself and in that department Hanks came through. My biggest regret is I didn’t get to see this in the theater, as I know it would have been an immersive experience. The good news though is that we get to see it at all, and if you enjoy lots of military talk and action on the high seas, then it’s full steam ahead for you with this one.