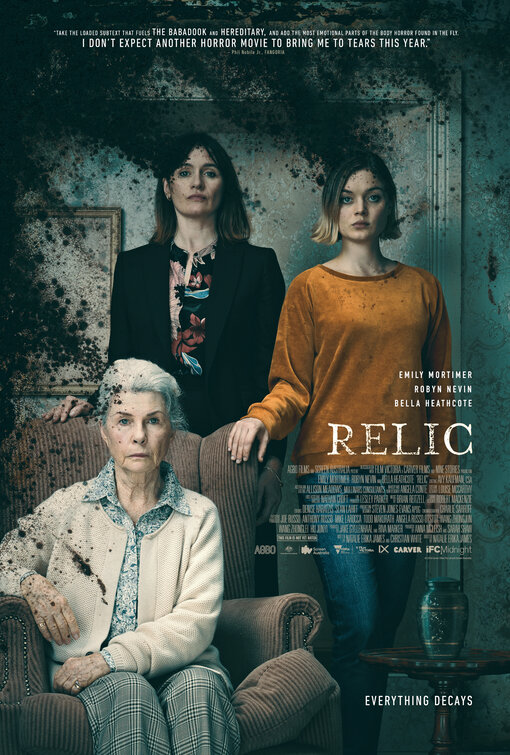 Some believe that the place a person lives can inherit the traits of its owner. You know you have felt it when you go over to someone’s house, a vibe you get, be it good or evil, you can just feel it in your bones. It’s not like you have to wait for the house to tell you to get out. For Natalie Erika James’s first feature she explores a world where a house has taken on the owner’s dementia and creating a world in which things don’t always seem like what they are in what could be the scariest of haunted house films, Relic.

Edna (Robyn Nevin) lives alone in a wooded area in a house that has been with her for a long time. Her daughter Kay (Emily Mortimer) lives in the city, but she receives a call that her mother has not been seen for a few days, which prompts her and her own daughter Sam (Bella Heathcote) to head that way. Once there the house looks in distress, and as she looks for her mother, Kay cleans up to give herself something to keep her mind busy. As suddenly as her mother disappeared, Edna reappears in the middle of the night like nothing has happened. After her mother receives a checkup, Kay knows that her mother cannot live alone, as she forgets things all the time, while using little notes to remind her to do everyday things. Sam does not agree with her mother’s plan and offers to move in with Edna, in order to take care of her. Things keep happening though, anger outbursts from Edna and the house just has a decaying feeling to it as well, all leading to a dark place that will leave them haunted.

Very few movies give me what some would call the hibiby-jibies, but man this movie left a mark on me that might be permanent. James uses her strong cast and a world so thoroughly thought out to drive the film to engulf you. Every turn throughout the house, every noise, you won’t be able to take your eyes off of the screen, even when you want to . The score from Brian Reitzell only adds to the atmosphere created by James in which things feel a little too real. This movie is going to give you not so much chills, but just an uneasy feeling as you watch the family fall deeper and deeper into the darkness that is the mind. The fall leads to an ending that in all the disturbing films I have seen over the years, even I had a hard time watching, because it just made me feel something I didn’t want to feel. James has created something unique here, that will both leave you in awe and probably the slightest bit traumatized, and that’s what a good filmmaker can do. Relic puts James with current horror royalty and will leave its marks on you for sure.

Relic is currently for rent on VOD