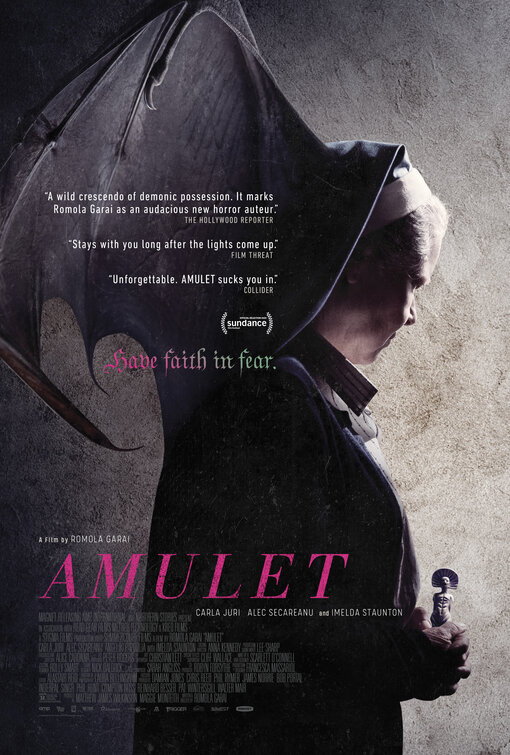 In Romola Garai’s feature directional debut Amulet, you can’t help but believe that there are some life lessons being taught to you. Now what exactly those lessons are, that would be up to your take away. It would be A). you reap what you sow, B). nothing in life is given to you for free, or C.) if you see shit you don’t understand, that is your cue to leave. For me I took all three lessons to heart and unlike the lead character Tomaz (Alec Secareanu) I would have been out of that situation with an extreme sense of quickness.

Tomaz is an ex-solider who because of a some teeth repaired by his father is sent to a remote check point far away from a raging civil war. While there, with nothing to do but count leaves on the trees that surround him he finds something buried in the ground that catches his eye. Being so remote, he usually only sees fellow soldiers coming back from the front line, until one day he finds a woman running towards him out of nowhere. He stops her and warns of her death if she proceeds to the border she is trying to cross and convinces her to stay with him. Alone and time do not mix well and something eventually happens that is not good. Fast forward some years later and Tomaz is now in London and works in construction while living in like a half way house of sorts. When a fire erupts there, he barley escapes with his life and is found by Sister Claire (Imelda Staunton), who gets him to a hospital. Later she comes back and now that he has nowhere to live, she offers a place for him to stay, with the promise that he will help make the needed repairs and that is where our life lessons begin.

Garai, who is better known as an actress from films like Atonement knows what look she is going for. Amulet is filled with gothic inspired themes that helps shape its intended message. The atmosphere is enhanced by the use of good European actors who only add to the authenticity of the story. Most of the film sets the mood for what is coming, splitting between flash backs on Tomaz’s days on his lonely patrol and his discovering just how bad life is going to get for him, that ends in quite a bit of blood. Garai does a great job of setting all that up and even while the story fizzles a little, it delivers in the end in an intense and gruesome way. With the dark place we are at in the world right now you would think that this would be the last thing you would want to see. But there is something about a fictional horror that can still pull you away from any real horrors you are dealing with. This is one of those films that envelops you with its ominous tone and its creepy imagery. A true must-see for fans of horror.

Amulet is now available on VOD