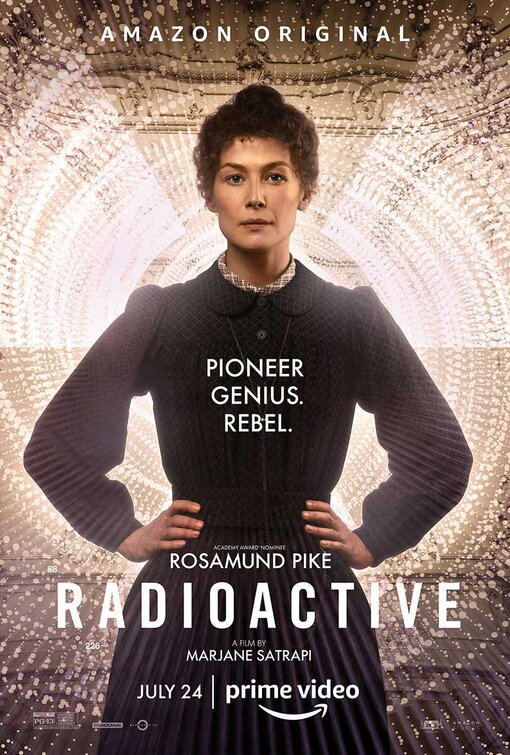 Biographies about masters of science in the cinema world can sometimes fail as an experiment. It is usually not their subject that can cause the failure, as watching something as great as the discovery of radioactivity is not a bore. No the problem can come with the delivery of the story and the method that is chosen to tell it. In Radioactive we are told the story of Marie Curie and her husband Pierre Curie whose discoveries changed the world in many ways, if only it was told in a more electric way.

Marie (Rosamund Pike) just can’t get any respect. As a woman in the late 1800’s in the scientific community, it is quite hard for her to get on equal ground for her experiments. After being evicted from her current location, she sets out to find a place, but is turned away time and time again. That’s when a man named Pierre Curie ( Sam Riley) comes into the picture and he offers her a place to do her work. Marie is at first hesitant as she despises a helping hand, but the lack of other offers changes her mind. Soon Marie and Pierre are collaborating in both work and life as they soon marry and start a family. That though is the least of their accomplishments, as together they discover radioactivity which leads to a couple of Nobel Prizes.

I really was hoping going into this with the likes of Rosamund Pike as the lead, that this would be something special. Instead of being award bait, Radioactive fails to become anything special. That is not the fault of Pike, who always seems to bring her “A” game and does so once again. No, where the film falters is with the screenplay, that really feels pretty uninspiring unlike its subject matter. The other questionable choice lies in the decision of showing the future benefits and drawbacks to the Curie’s discovery via flash forwards, which often feel out of place and not really needed. Radioactive also achieves both the feeling of being too long as well as feeling like the story is rushed, which is quite dubious. I place this into the same category as last year’s Harriett, both stories about incredible women that somehow get told in average ways. Curie deserved something better, but in a world where some might have forgotten her accomplishments, having something out there may inspire others to seek out more on the life of Marie Curie.