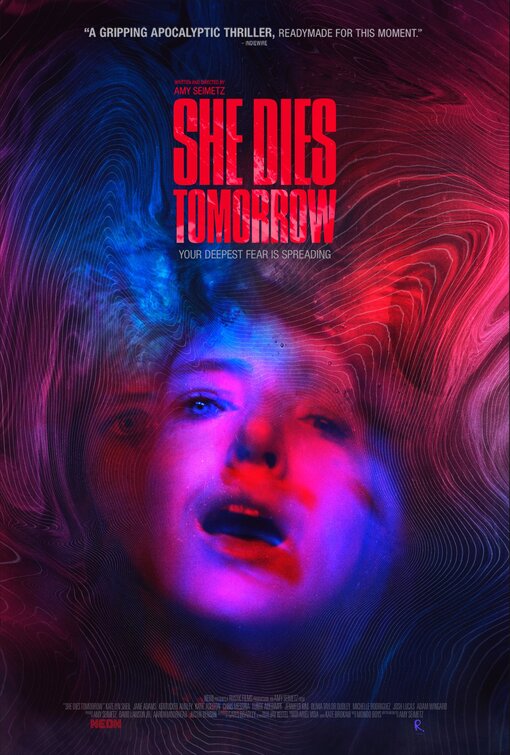 If you were ever a fan of Law & Order you would be familiar with the “ripped from today’s headlines” that the show would promote its stories under. She Dies Tomorrow might not be ripped from today’s headline, but it feels quite at home in a world in which everyone is in quarantine. The film which is written and directed by Amy Seimetz is dark, moody and at times funny, but never favors one tone over the other, but it delivers what feels like a perfectly, timely movie.

Amy (Kate Lyn Sheil) has just bought a new house, but instead of feeling joyous, she instead has this pending thought that she is going to die tomorrow. This feeling has caused her to throw her inhibitions away and revisit demons that she had moved past. When Amy shares this feeling that is overwhelming her with her friend Jane (Jane Adams) at first Jane puts her off because of her past. Later that night Jane comes and visits and when she leaves and returns home that knowing that she is going to die as well. Now Jane understands what Amy was going through and she starts to experience the same realization of her impending death and like Amy feels the need to share it with someone. Like one of those chain emails that can infect your computer as you share it, this belief of your death is shared with anyone who you come in contact with. The end effect is as intriguing as it sounds as this is one conversation you wouldn’t want to be a part of.

She Dies Tomorrow feels right at home in a world where we don’t really know what tomorrow will bring. While that might not sound like the most appealing thing out there, this movie is so good, you will forgive it for feeling a little too in the moment. A lot of that has to do with Amy Seimetz, who directing style feels very much in line with the likes of Panos Cosmatos (Mandy), but with a style that is all her own. Seimetz often uses light, color and sound to give you a peak at Amy’s state of mind and while the film has a dark premise, it still finds moments to make you laugh. I really wish we could have seen this movie in a theater, as I think the communal experience would have only added to the eerie nature of the film. There are times when a work of art like this don’t come together with the intention to feel like the moment. Sometimes it appears to have happened more accidentally and you can tell that is the case here. She Dies Tomorrow is not just a good movie for now it is one for all times and is just the movie we need in the uncertainty of 2020.

She Dies Tomorrow is available on VOD