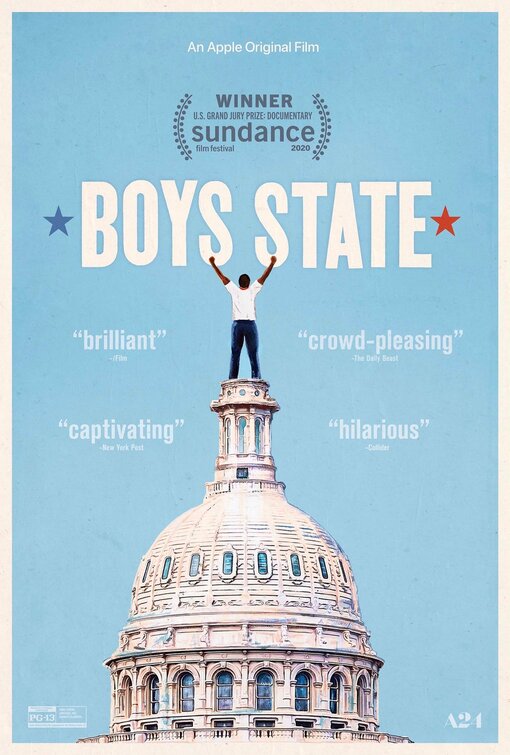 Since 1935 The American Legion has sponsored a program where teen boys and girls attend, that give them a lesson on our political system. They are separated first by gender, a Boys state and Girls state and then into two parties: Nationalist and Federalist. These over a thousand teenagers ranging from 16 to 17 years old participate in mock elections that go up to as high as Governor, as well as design their party platforms and even elect those party leaders as well. This all takes place over a week and might just be the best insight you might get in both our current and future world of politics.

Filmmakers McBaine and Moss focus their camera on five different individuals. Steven, Ben, Eddy, René, and Robert, all who have high aspirations as they start the camp. We first meet Ben, a double amputee who longs to be his parties choice to run as Governor. It doesn’t take long for him to realize that he doesn’t have the cult of personality for such a position and instead tries for his party leadership, something he accomplishes in getting. Ben’s approach is a scorched earth approach and will do what it takes for his party to win. The Nationalist are run by René, a smart black liberal from Chicago who doesn’t have the support of his own party. While René and Ben lead the plans for their respective parties. Steven and Robert are vying to be the Nationalist’s choice for Governor, while Eddy is the choice of the Federalist for that same race. With Boys State all the covers are gone and we see a win at any cost attitude that engulfs the two parties and puts under the microscope a system that engorges people to adapt beliefs in order to win. Each of the five boys who are followed have different reasons on why they have chosen their current paths and where they ultimately want to go. Whatever the individual reasons are not as important as the reason for the event and the lessons it hopes to teach everyone involved.

Like with real politicians it doesn’t take you long to side with one of the main figures based on their actions and beliefs. While these boys all come in as equals, once the party separation is complete, it becomes a my team vs. yours atmosphere. It is also not hard to recognize that some of these boys have talent and that they will go far in this thing called life and in politics if they indeed choose to go that route. In a day when civics is not often taught in our schools, this method is something that more kids should experience as the process would help for greater understanding and participation after a week of learning at this level. Like that idea? Boys State should be on your radar as it is a perfect look into a system that many feel disenchanted by and just might be the best documentary you will see all year.