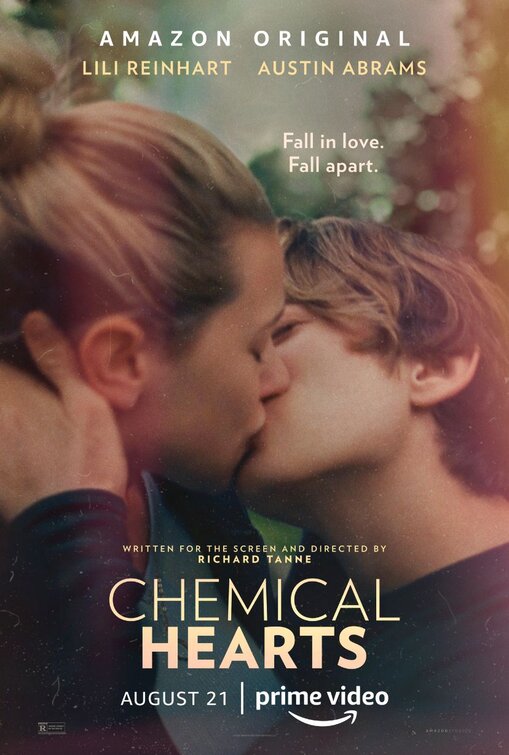 All of us can recall our time as a teenager or as it is put in the new film Chemical Hearts, that time when you are in limbo between being a kid and becoming an adult. What I remember is a time filled with awkwardness where I was the farthest thing from cool and my life was nothing like these all too perfect ones that you see in the movies. My life had nothing like these teenage love affairs that is portrayed and for sure there was no soundtrack to what I was feeling. Now I see movies like Chemical Hearts as being a place in limbo, the place before you become an adult and realize you don’t always get the film you want to be with.

Henry Page ( Austin Abrams) is you basic run of the mill nobody in high school. Sure he is in line to be the editor for the school’s paper, but in the grand scheme of high school, he is on the bottom of the totem pole. For three years he has been working for that editor spot and just when he thinks he’s got it a new girl name Grace (Lili Reinhart) appears and all of a sudden they are offered to be editors together. Grace though doesn’t want it and instead offers to just help with some of the duties. Grace is a mystery that draws Henry in and soon they are walking home together, with Grace giving him a ride home at the end of that walk. Soon with the help of Google, Henry discovers that Grace was in an accident that claimed the life of her boyfriend and left her with a bad knee that makes her have to use a cane to walk. Grace is in a bad spot, but like Henry’s hobby of Kintsugi he tries to fix Grace by loving her. That goes as well as you would think it would as Henry continues his trip though limbo alone and wanting.

As the credits started to roll as the film ended, I really didn’t know what I thought of what I just saw. Chemical Hearts is about as paint by numbers a coming-of-age romance as a movie can get. Nothing in the story separates it from the many films before, but at the same time nothing in it made you have feeling of despair. Not to sound all cliché, but like what the story says about teenagers just being stuck in limbo, this movie does that very thing, and not in a clever symbolic way. There is nothing really to love or hate about what you are watching as everything can be summed up in two words: it’s fine. Tanne who adapted the screenplay from Sutherland’s popular novel already has Southside with You under his belt, which is excellent, but where that felt natural, this movie feels like pretty much like all that direct to streaming romantic swill out there. This movie will connect with some people who have yet to be exposed the the classics, but there are enough eye rolling moments in this movie that might make some question what they are still watching. For me I was fine with what I saw, a movie that I liked fine enough, but not special enough to be memorable.