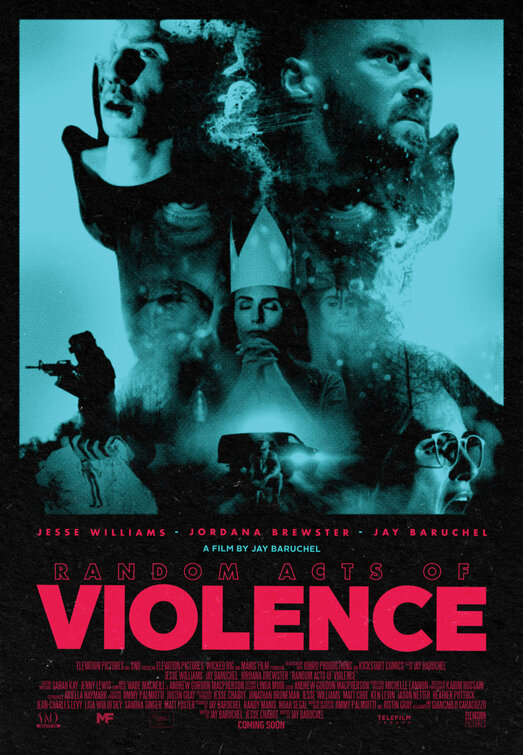 There has always been a group of people that have argued that the violence in art is often the inspiration for violence in real life. That is something I don’t personally buy into as I believe art gets its inspiration from life itself. In Jay Baruchel’s new film Random Acts of Violence, based on a Jay Baruchelcomic from 2010 by the same name, this question is brought up in the most brutal way you can think of. This of course is not the place to look for answers to such complex questions, but instead to find out if Baruchel can deliver a good slasher movie.

Todd (Jesse Williams) is the creator of a successful independent horror comic that chronicles the murders of a killer along a highway over a period of time called Slasherman. Having reached his final issue he has run into a road black on how to end it. His girlfriend Kathy (Jordana Brewster) has come up with an idea that could help them both, and that is a road trip along the same highway the killer staked all those years ago. Coming with him is Todd’s business manager Ezra (Jay Baruchel), and his assistant Aurora (Niamh Wilson) as they all climb in the car and head for their destination. Things along the way start to get a little choppy as people are getting killed and the killer calling Todd adding to the mystery. As the killer complicates things for the creator at home, back on the road more random people are dying. Soon Todd’s friends are now in danger as the killer might be trying to give Todd the inspiration for the ending he can’t come up with.

Baruchel tries to deliver a slasher film to remember, and while he gets some things right, it ultimately falls short of that goal. You can see that the creators are fans of the genre as they attempt to give you something original. With elements echoing films like The Dark Half with its creator/creation and the Scream sequels with its fandom, there is some where to explore, but it has little time for that. It definitely has the right amount of brutality and gore for what it wants to be and with the help of some really good practical effects it gets those parts right. Where is fails is in creating anything memorable, and unfortunately like the creator in the film, it can’t quite nail the ending. The energy is there though and there is one scene towards the end that is really well done. Those moments are just not abundant, as the movie just has a lot of that average feel to it. At least you are only in for an eighty minute run time, which is a pretty sweet spot to be in as far as that goes. As for the sweet spot for a slasher film, Random Acts of Violence misses that, but you still end up with something kind of cool.

Random Acts of Violence is available on Shudder August 21st