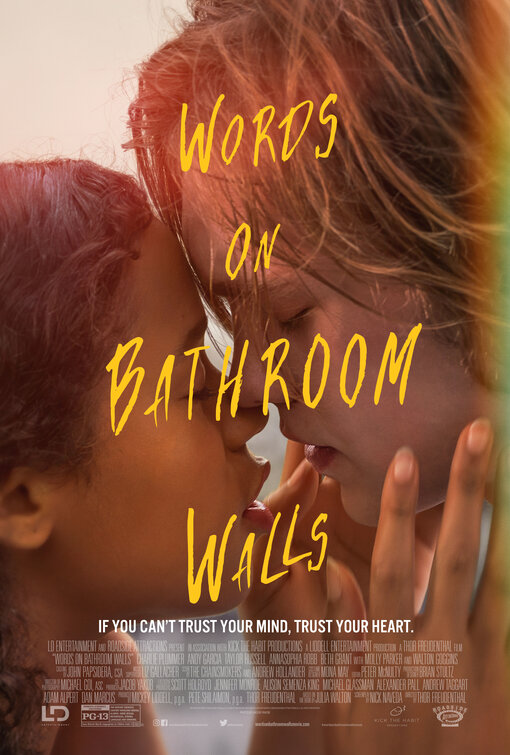 Growing up is a hard thing to do, and if you’re own life events don’t prove that enough, we have countless coming of age stories to remind us of that. The latest to get the movie treatment is Julia Walton’s Words on the Bathroom Walls, a novel about a teenager dealing with paranoid schizophrenia that definitely isn’t material for your run of the mill movie about growing up. It’s easy to look at someone who has a physical limitations and try and help them, but for some reason we look at mental illness as a lost cause and just throw those people away. This is a story that might help you see them for who they are, just people trying to live life as they experience it and follow their dreams just like everyone else.

Adam (Charlie Plummer) is your typical teenage boy, who has over time discovered a love for the culinary arts. He has a plan to follow that dream, but that plan gets sidetracked when after an accident at his school he is diagnosed with paranoid schizophrenia. Needing to start over fresh he transfers to another school right after he starts taking a new drug that is supposed to help him. Adam’s schizophrenia materializes itself in the form of different voices in his head, but the new drug seems to have given him a normal life. It is then he meets Myra (Taylor Russell), who is the smartest kid in school and who agrees to tutor Adam so that he reaches the grades he needs to graduate. It is when things seem to be going the best when Adam starts to realize that there are side effects to the drug he is taking, and hampering the things he loves the most which is cooking. With that Adam stops taking the drug, which sets in motion a collision with the ones that love Adam the most.

What Words on the Bathroom Wall does well is give you a feeling of what it is like to live with such a mental disorder. It is easy to see someone dealing with this and look at them in a way that makes them feel like an outcast. Both Plummer and Russell are good in their roles, as the rest of the cast is filled out with great performers like Walton Goggins and Andy Garcia. I feel the story and what it has to show is worth the watch, and Freudenthal’s direction excels there, but this movie could very easily get lost in the sea of coming of age stories. That’s not to say it is bad by any means, it just doesn’t do much to stand itself apart from the crowd. It leans into formulaic territory but I still enjoyed it, mostly because it gave me a glimpse into a world I don’t know and for me to look in the mirror on how I look at people with this disorder, which, that alone is worth watching this movie for.