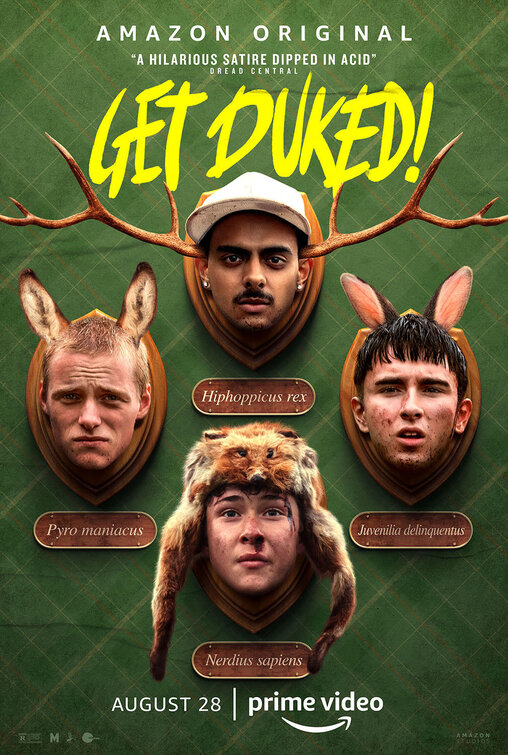 If you watch enough movies you know when you put a group of city folk out in the wilderness, things can get a bit silly. With movies like City Slickers and Troop Beverly Hills as exhibit A and B, you see where I am going (and if you haven’t seen Troop Beverly Hills you should), but no matter what befalls them the good thing for us is it results in comic hijinks. In Get Duked! those hijinks are on full display but with a nitro boost to them that will having you bobbing your head as you are laughing on the verge of tears.

Three lads from school have been enlisted in the Duke of Edinburgh forestry challenge to avoid being kicked out of school for an incident involving an exploding toilet. Those lads are Duncan (Lewis Gribben), Dean (Rian Gordon) and DJ Beatroot ( Viraj Juneja) , who is not to be confused with DJ Carrot. They are led by their teacher Mr. Carlyle (Jonathan Aris), who will drop the boys off far from their campsite in order for them to find their way using a good old fashion map. Along for the ride, so that he can experience life is Ian (Samuel Bottomley) who is in a classic ‘which one of these is not like the other’ scenario. Ian has been home schooled and doesn’t really have any friends, while the other three are the picture of what you would say is wrong with todays youth. The boys eventually are off on their trek but they do everything they can to get lost and that’s before a masked wearing guy (Eddie Izzard) starts to hunt them with his rifle. You see this is a yearly event, in which the people who rule, hunt who they believe is the downfall of civilization as they know it. These boys are smarter than they seem though, or stupid enough not to fear as they try to avoid all the dangers of the Scottish Highlands.

Get Duked! is the creation of Ninian Doff, a music video director who is making his feature debut here. Originally titled Boyz in the Woods on the festival circuit it was picked up by Amazon and renamed its current title (maybe a mistake). The story is told in a hyper-stylized way with effects and music which are used not as a distraction but as a way to enhance the narrative as the boys lose their minds possibly along with their lives. What you get is something between Trainspotting and Hot Fuzz as if there couldn’t be any better mash up. While the thick Scottish accents might have you wondering what is being said (subtitles suggested), most of the time it doesn’t matter as the films actions speak louder than its words. The whole film just turns out to be an incredibly good time that shows once again people from the city should not venture out into the wild. Lucky for us we get to just watch and laugh, as this group of boys wacky in wilderness! Wait that’s not right.