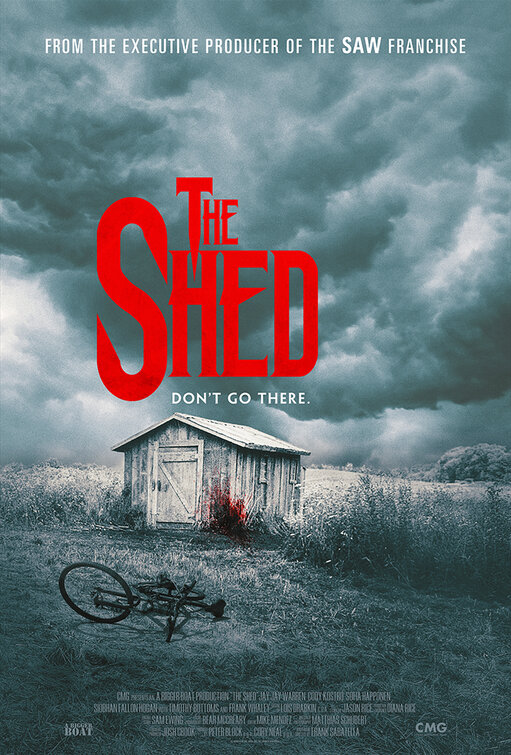 I have a list of places that I try to stay away from, because you know only bad things can happen there. Places on this list are the ocean, the forest, a cave, and of course a shed, because for me the only reason I would want to go to any of those places would be to get killed. So with Frank Sabatella’s latest The Shed I am already prepared for the bad things that are going to happen to anyone who enters it, I just wasn’t prepared for everything else I saw.

Stan (Jay Jay Warren) is an orphan who currently lives with his grandfather (Timothy Bottoms) and his tyrannical rule. If life didn’t suck enough at home for Stan, he and his friend Dommer (Cody Kostro) are the targets of bullies at school, one of these bullies has the attention of Roxy (Sofia Happonen), the girl who Stan is crazy about. So things are not going good for Stan and life has decided to throw another curve ball in the form of a creature, that has taken up residency in Stan’s shed. After sending in his dog to attack whatever is in there, Stan finds out quicky that it is something not to mess with. After the thing in the shed claims another victim, Stan locks it in there until he can come up with a plan to kill it. Making good decisions is not Stan’s strong point however and after telling Dommer about it, Dommer’s idea is to feed it the bullies who have made their school life hell for the past three years. Things go wrong like they do often when you lock a blood-sucking beast in a shed and Stan and Roxy have to come up with a plan to end this this madness once and for all.

There are actually some cool things about The Shed, but unfortunately for us, the bad truly outweighs the good. What they do get right is the creature effects, as they look pretty chilling. There is some good low budget horror things going on here and that was fun to watch. What was not as fun was the acting, which I don’t know to put the central blame on, the actors or the script. I often found myself laughing in places that you were not supposed to laugh. I was getting pretty excited at the thought of a Home Alone like finale, but instead ended up with one that is a lot less fun and a whole lot more predictable. The only thing The Shed ended up doing was reminding me not to either go into a shed or watch a movie called The Shed, unless I want bad things to happen.

The Shed premiers on Shudder 8/28