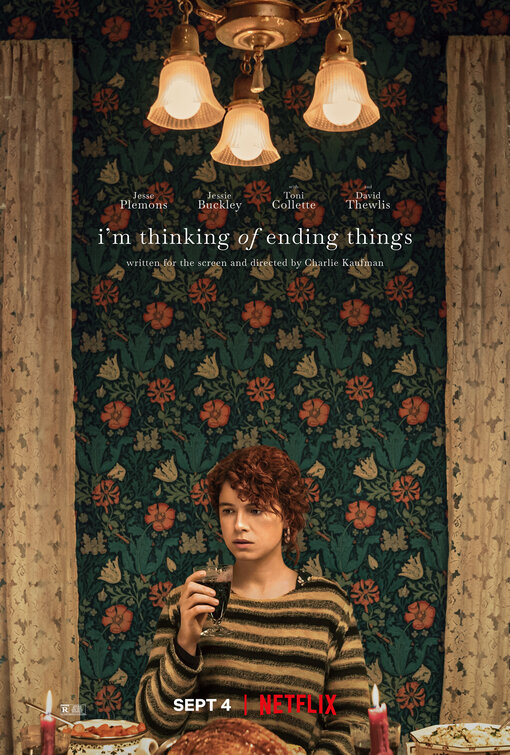 Going into a Charlie Kaufman film you have to come prepared. You must put away any and all distractions as his films demand your complete attention and one turn away could feel like someone just turned the lights off in an unfamiliar room. Kaufman, or the mind behind Being John Malkovich, Eternal Sunshine of the Spotless Mind, and Synecdoche, New York is back with a new trip down awkward lane and this says so much, but at the same time says so little.

Like that last part of the last sentence I’m Thinking of Ending Things is a little of everything and will definitely have you questioning what you saw or didn’t see. The story sounds simple enough, a Young Woman (Jessie Buckley) is about to meet her boyfriend Jake’s (Jesse Plemons) parents. Before the drive The Woman, who is referred to by different names, is already thinking it might be time to end things. The ride is long, but once they arrive at Jake’s childhood home, things really take a turn. His mother (Toni Collette) laughs too loud and seems to go out of her way to embarrass Jake, while his father (David Thewlis) questions his son’s new girlfriend on her life. The trip was supposed to be just for a few hours, but time doesn’t flow normally in a Kaufman movie, as characters age and details change that will make you want to go back to reaffirm what you saw. Just click your heels three times and say this is a Charlie Kaufman film and everything will make more sense.

While it does land on the “feels a little long” part of the scale, it never is boring and it will keep you on your toes. This is the first time Kaufman has adapted someone else’s work, but if you are familiar with Reid’s novel, then you know it is kind of is a perfect fit. Led by Buckley and Plemons who are great together and the always amazing Collette, who gives another stellar performance. Kaufman has a way of taking awkwardness to another level, but have his characters so relatable as well as conversations that feel like ones real people might have. With I’m Thinking of Ending Things, Kaufman not only bends your mind with this one, he also bends genres. What starts as a relationship movie, dips its toes into horror, before it goes into another direction. This film is not for everyone, hell there were times I didn’t know if it was for me. While there are times you feel like you don’t have your balance, there is a point that feel your feet on the floor and at that point you just sit back and enjoy the world that you are in. It’s not for everyone, but for those who love Kaufman, this is one you don’t want to miss.