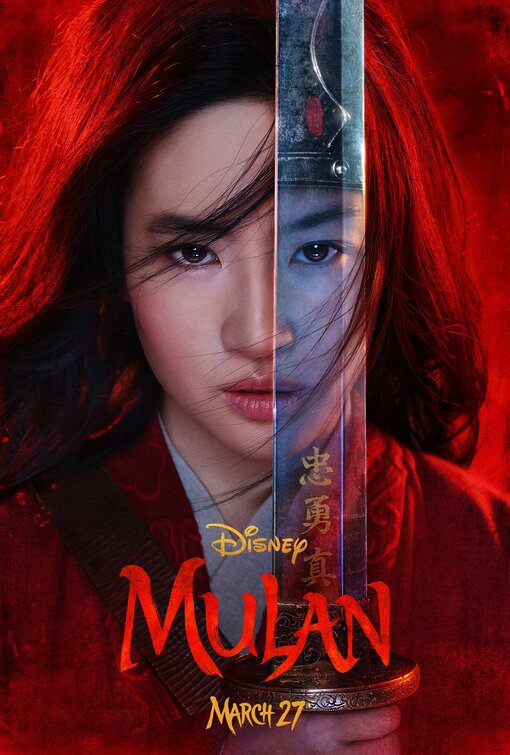 Disney has gotten a lot right over the last ten years or so, mostly because of their Marvel films leading the way to box office dominance. It has been also during this time that Disney has decided to go back to the well and has been remaking their animated library to live action films, all to varying degrees success. For many, the best of the bunch has always been Cinderella, but for most they have been both at times laughable and forgettable at best. Now comes a live action version of Mulan, a film that looks less like a remake of their animated film and more like a retelling of the Chinese folk legend, which in this case might be the key to what this film becomes.

Mulan (Yifei Liu) is the daughter of Zhou (Tzi Ma) a man who was at one time a warrior in his own right, only to have age take away the skills he once possessed. With her sister and mother they all live in a village were Mulan does things that a son would do which her father helps to indulge. When an army threatens the empire, the Emperor (Jet Li) orders that each family donate one son to the defense of the empire. Zhou, not having a son volunteers himself, but during the night Mulan takes her father’s armor and sword and goes in his place, hiding the fact that she is a girl. Once there she always takes guard duty to avoid having to shower with the other men as she tries to blend in, but starts to stand out because of her skills. It is only after an encounter that she discovers her deceit is hampering her chi and during battle she rids herself of her disguise and leads her battalion to victory. No matter though what she did she was deceitful and Commander Tung ( Donnie Yen ) banishers her to live out her life in shame for what she has done. It is only through sheer will that she is able to convince everyone that she has that will to save the empire and defeat their enemy once and for all.

Disney has gotten a lot wrong in their remakes, but with Mulan they got it mostly right. Retelling the Chinese folk legend seems to be the key that has unlocked this version, a version that feels more like a companion piece than a remake. Director Niki Caro and Cinematographer Mandy Walker have delivered a beauty of a film that is really something to behold. Where it does falter is in the script by Rick Jaffe, Amanda Silver, Elizabeth Martin, and Lauren Hynek, that often feels flat in its delivery. That’s the only thing that feels flat though as everything else really soars including a great cast that brings to life characters that you already love. For me everything that works for this film has made it my favorite to date of Disney’s retelling of their library and my only regret is not seeing it in a theater with a crowd in the way it was intended to be seen. This is a story for the little girls in the world that tells them that anything is possible if you believe in oneself.