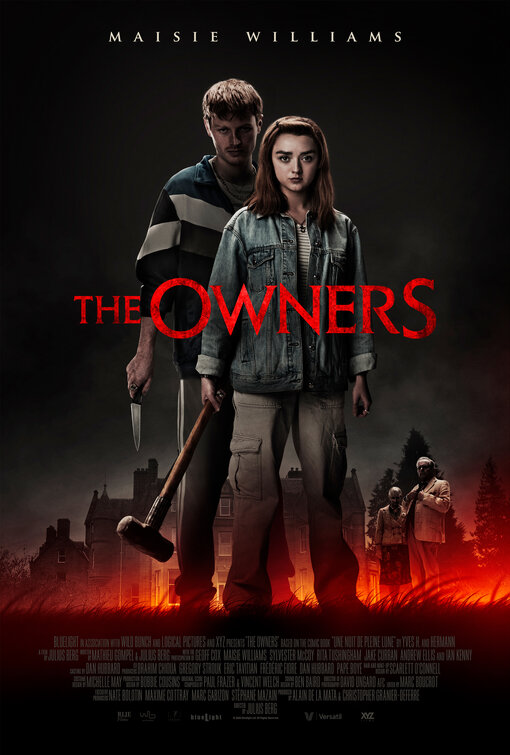 Breaking into a house is never a good idea, but for three friends and a girl who is just trying to get to work, they are about to learn that lesson the hard way. In Julius Berg and Mathieu Gompel new home invasion thriller The Owners they take a well-used horror troupe and try to turn it on its head. What you end up with is a story where you might not be able to tell who is good or bad and you damn sure don’t really care if any of them live.

Mary ( Massie Williams) you see wants to get to work, but her boyfriend Nathan ( Ian Kenny) has her car. She finds him with his mates Terry (Andrew Ellis) and Gaz ( Jake Curran) who are parked overlooking a rather nice house seemly up to no good. Looks would not be deceiving here as Terry’s mom works in that house and the story goes that there is a large stack of cash in a safe and the three boys plan to get it after its owners leave. Things don’t start off good as Terry knows about a safe, but he has no idea where the location of said safe is. After finally finding what came for, they are unable to get inside it, but that is when the owners come back home and the break in becomes a hostage situation . The two owners, Dr. Huggins (Sylvester McCoy) and his wife Ellen (Rita Tushingham) look fragile and innocent enough, but looks can be deceiving and after a turn of events it would appear that they are the aggressors. Blood is spilled and lives are lost as a simple break-in becomes a night where you don’t know who makes it.

You always heard to never judge a book by its cover, and The Owners reaffirm that adage in the form of who the bad guy really is here. Writers Mathieu Gompel and Julius Berg do give us the twist on the home invasion, but it the scene chewing done by McCoy and Curran is what really makes you want to stay till the end to see how it all shakes out. Where The Owners also delivers is in revealing that Maisie Williams has a future as a scream queen if she wants it, a future I hope she considers with the form she shows here. The Owners might not be the perfect horror movie, but with a nice set up and some good performances it carries its own weight as a one off horror film. Once again bad ideas don’t payoff and this one is here to teach that lesson, but most of all its here to deliver a pretty entertaining movie.

Available in theaters and on digital demand Sep 4th