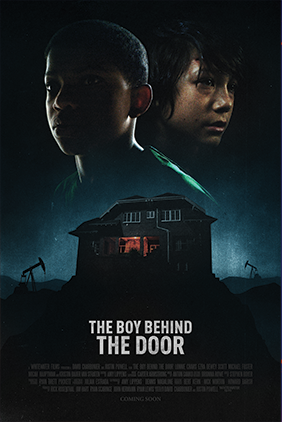 Bobby (Lonnie Chavis) and Kevin’s (Ezra Dewey) day started off like any other game day. A few hours before they were set to play they were throwing the ball back in forth when it goes into the woods and as they go to retrieve it one at a time, both boys are taken. The pair end up bound and gaged in the trunk of a car, but Bobby is able to free himself. As he makes a run for it he hears Kevin’s screams, and he decides that he can’t leave his friend behind. What follows is a series of one tense moment after another as the boys try to either call for help or escape their captors.

The Boy Behind the Door  was a pleasant surprise, because the title doesn’t really set up for what you are about to see. There is some legit edge of your seat moments that make you want to shout at the screen, telling Bobby what to do next. Writers David Charbonier and Justin Powell, who both directed the film as well, pack some good tension in this nearly hour and thirty minute movie and give you a clear picture on who you are rooting for and who you are meant to despise.

Because of the gritty and intense nature of the film it is easier to forgive the few “movie” mistakes either voluntary or involuntary as it was intended, like the super absorbent hand towel. I am not mincing my words when I say this might be one of the better movies out there, because it didn’t need some father telling someone on the phone about his skills, it’s just the kids and the bad guys. This is a well crafted and at times horrific story that could take place in anywhere USA. What comes through the most throughout the intensity of the situation is the power of boyhood friendships. Especially when they are put to the ultimate test.

How to Deter a Robber --Fantastic Fest Review