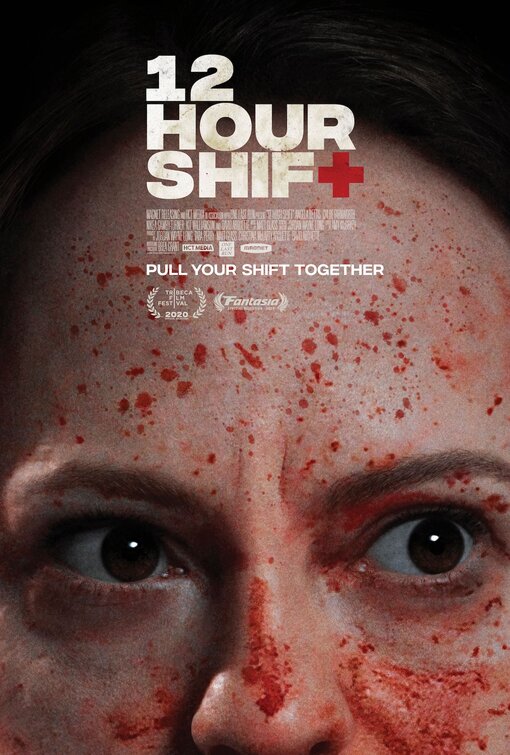 If you were in the hospital and nurse Mandy (Angela Bettis) happened to be your nurse, your day might not go so well. If her non- sunny disposition didn’t do it for you, the fact that her and another nurse are stealing people’s organs to sell on the black market might. Written and Directed by Brea Grant, who coming off last year’s great performance in After Midnight gets behind the camera for her second feature, 12 Hour Shift a black comedy you will surely enjoy.

The year is 1999 and we are about to start a twelve hour shift with Mandy, a drug addicted nurse who does not seem to be have the happiest of lives. Never with a smile on her face as she reports to work and the head nurse Karen (Nikea Gamby-Turner) gets her going right away, but being a nurse is not her only gig, she has a side hustle as well. When she finds a patient on deaths door, she helps herself to an organ or two in a racket she has with Karen. In order to sell the organs, Mandy has brought in her cousin Regina (Chloe Famworth) to be the broker, but Regina is what you call, not the sharpest tool in the shed. It is during the exchange, you know money for kidney, that Regina starts a night that will leave more than a few people lifeless. When Regina arrives at the buyers place, she realizes that she has lost the kidney and after her life is threaten she goes back to find it. Unable to locate it she tries to get Mandy to help her get another, but when she refuses she takes measures into her own hands. Bodies pile up as Regina tries to get what she needs, setting up one night that no one predicted would happen before Y2K.

When it comes to getting some laughter out of a dark situation, Grant definitely delivers. There is just something about watching a comedy of errors that involves a lot of blood as pure entertainment. 12 Hour Shift comes off as a light version of Coen brother film, which is meant as a compliment, as they as the masters on the black comedy. While Bettis plays Mandy with little to no personality and someone you really have no desire to know, she still finds a way to become one of your favorite characters of the year. Maybe it’s her “no shits given” attitude, or maybe it’s the humanity she shows at the end, just when you think there is no way she has a heart. Whatever it is, it boils down to it being the combination of Bettis’s performance and Grant’s fun script. I have never been a fan of going to a hospital, I mean who is, but if I ever had to go, this hospital would be the last one I would go to. Instead just sign me up to hear the stories of people who did, because if they are anything like this, I am all in.

The Curse of Audrey Earnshaw