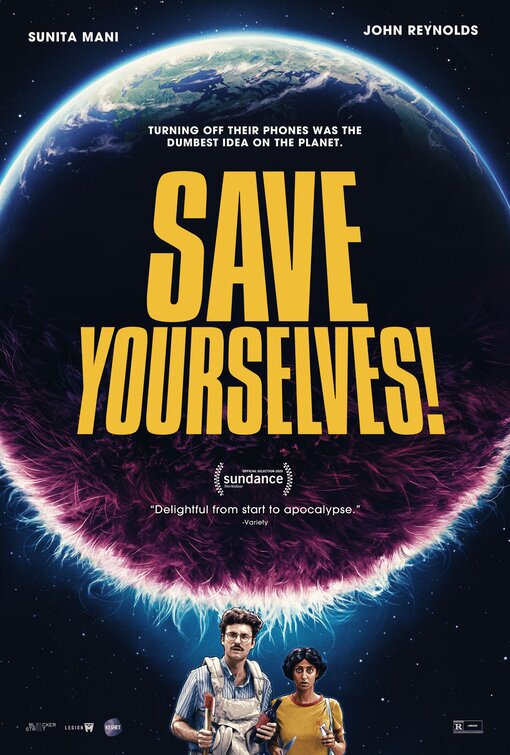 With every “end of the world” movie things always seem to be the same. Things go to hell and if you survive the beginning onslaught the characters always seem to have the skills to survive their new reality. Save Yourselves! gets that mostly because of the connivence’s of modern life have have led us to forget our ‘hunter and gather’ skills and some would have trouble even with the basics we would need to survive. Su (Sunita Mani) and Jack (John Reynolds) are the poster children for most of us. While they want to be good humans with what they eat and such, they are just slaves to technology, which makes them feel less together and in the need of a tech break. So off they go, leaving the world behind, but little do they know that the world will not be the same when they plug back in.

Once in the woods all is grand as they see the beauty of nature and not have their eyes glued to a device. While they are taking in the lost world in front of them, Su and Jack seem to be oblivious to what is happening around them. While they reconnect with each other, the world is falling apart after being attacked by aliens who have a thing for ethanol. These aliens look like cute furballs ( think giant tribbles), who are not here to be cute, but to kill and drink all the ethanol they can get their tongues on. Jack and Su are up the creek because between them that have zero skills needed for survival and really are alive more out of luck than actually trying. I could see myself in Jack, admitting he doesn’t feel like a man because he can’t even get the hook out of the fish to feed his family. Luck or lack of knowing seems to be saving them as they try and escape whatever is after them.

Save Yourselves!  really is a more fact base survival movie. For starters everyone would be about themselves, but also I really think most people wouldn’t know what to do, myself included. Su and Jack at first don’t really seem like they should be together, but as the movie goes on it becomes apparent that they are quite perfect for each other.  This film is all about them and Mani and Reynolds deliver as they both are funny and charming in their own awkward ways. The trailer plays it up like a cheesy sci-fi film from the 1950’s, and the film is like a modern version of that concept. Writer’s/Directors Alex Huston Fischer and Eleanor Wilson really craft a fun story that I feel plays much better with a crowd, but is still more than enjoyable in a party of one on your own couch. 2020 has taken a lot of joys out of our life, the biggest for me is the experience of seeing a movie with a crowd. Save Yourselves! feels like it fits right in where we are at right now and shows you can have fun even if the world as you know it is ending all around you.