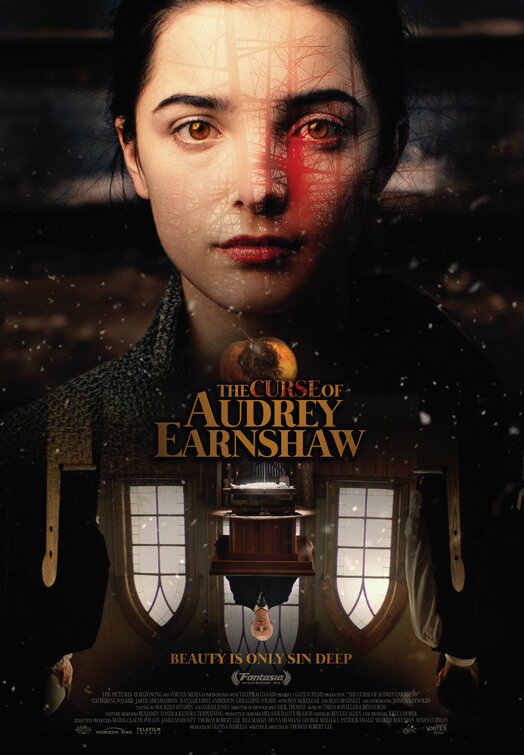 From the opening moments of The Curse of Audrey Earnshaw you know you are going to a dreadful place. The year is 1973 and we are in the village of Irish Christians who have shunned technology for a simple way of life that they have lived since 1873. Life had always been good, that was until the night of an eclipse some seventeen years ago, things from then have taken a turn for the worse. Crops have stopped growing and tragedy has fallen on families throughout the village, well all except one.

The farm that seems to have been spared is that of Agatha Earnshaw (Catherine Walker), who lives by herself. There has been stories that Agatha has a daughter, though no one has seen her, the stories persist. Agatha indeed does have a daughter whom she named Audrey (Jessica Reynolds), and while she looks innocent, there are darker forces at work here. Audrey you see might be a witch, as if there is any doubt after a you witness a ceremony that involves a bunch of women in a circle as they drink Audrey’s blood. It is on the way back from that event that Agatha’s ruse comes to an end as a man from her village named Bernard (Don McKellar) sees her and her daughter on the road back home. It is that chance encounter that increases the level of madness in the village that ends in a nightmare.

Very much in the key of a film like Robert Eggers The Witch, The Curse of Audrey Earnshaw goes for that slow to build kind of horror. There is nothing here that is going to make you jump, instead writer/director Thomas Robert Lee goes for those moments that might make you squirm indoor seat and maybe even look away. The film has a beauty with its pale colors and period costumes, Audrey Earnshaw hits is boiling point at just the right time. With that said this is not a film for people who want instant gratification in their horror, no, this is for fans of films that feel that constant sense of dread, and with this one coming out in October is what you call perfect timing. Lee definitely gets you in the spooky spirt and delivers one of the better horror movies in a year that feels like a horror movie itself. As you can tell you can count me as a fan of this one as I am a fan of things that go bump in the night. This one doesn’t have much bump, but you can count on your night being a little darker after it.