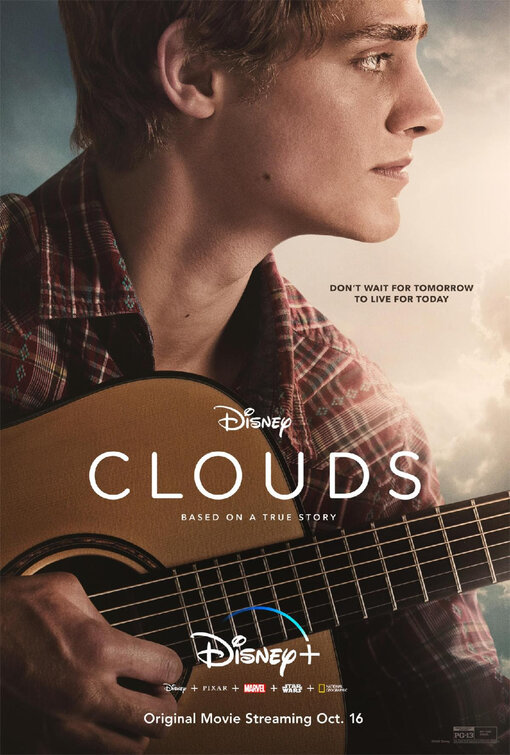 2020 has given us plenty of reasons to cry, so putting on a movie that is sure to inspire a Niagara Falls kind of situation doesn’t sound like the best idea. Clouds has its moments that are sure to bring those tears, but also it has moments that will leave your heart soaring, so maybe it’s just the kind of movie we need right now. Based on the novel Fly a little Higher by Laura Sobiech, , whose son’s experience is the basis of said story and will give you something to believe in.

Zach (Fin Argus ) has been living with cancer for a while now, and even with a disease attacking his body, he lives his life as a normal teenager. Zach though is not normal, because of his cancer and because he is also a talented musician who plays here and there with his best friend Sammy (Sabrina Carpenter). Everything seems up for Zach as he gets lands a date with the girl of his dreams in Amy (Madison Iseman) and a family that completely supports him in everything he does. Time though is not on Zach’s side, after a health scare he and his family learn his cancer is terminal and that he probably only has months to live. After the shock wears off, Zach and Sammy decide to write a song together and after becoming a minor hit on YouTube and with a little help, Zach and Sammy sign a record deal. Things come together from there and Zach writes a song called Clouds that becomes a hit, but just when Zach is up in the clouds his body brings him back to earth.

Writing a story where there is not happy ending doesn’t really seem like the kind of movie you would want. I thought this after a few tears, but more smiles would disagree, as Clouds might be just what the heart needs. The story from Sobiech’s novel by Casey La Scala, Patrick Kopka, and Kara Holden, the latter writing the screenplay does come off more than a few times like a movie of the week. The good thing is that it rebounds from that, because it seems to never dip too much into the sadness or the joy. Instead for every moment it might make you cry, it gives you a moment that makes you soul rise a little. For me one of the harder things, after of course the story itself, was seeing Neve Campbell and Tom Everett Scott playing parents, which to say the least made me feel quite old. My comfort level with my own age aside Clouds might not be some form of perfection, but it’s a welcome sight none the less. Stories like this are not always the easiest to hear, but the aftermath, the money raised to fight children’s cancer is. So grab a few tissues and sing along, Clouds might just make you feel like you are among them.

The Wolf of Snow Hollow

The Trial of the Chicago 7