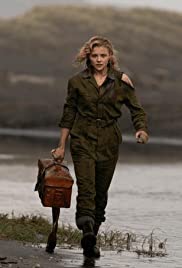 Picture this, its 1943, the war in the Pacific is in full swing. A bomber on a mission takes on a female passenger with a package that is top secret. As they fly their mission they encounter enemy planes, but it’s a unforeseen enemy that causes the most problems. That is the basic premise of Roseanne Liang’s first feature in a decade, Shadow in the Cloud, but there is so much more to this adventure in the air.

Maude Garett (Chloë Grace Moretz) is a female airman who has been given a task from her superior. To take a package, not open it and get aboard a plane to get it to a specific destination. This is World War II and women on a plane full of men is not looked upon as good luck. She hands the note to the navigation officer, who with complete doubt hands the note to the Captain, who instructs Taggart to place Garrett in the bottom turret until they get in the air and sort it all out. The package she is carrying though will not fit down with her and after much resistance she hands it over to another who swears he will keep it safe. Once in the air things get crazy, lives are lost, and Garett reveals who she really is, someone who is here to chew bubble gum and kick ass, and she is all out of bubble gum.

Shadow in the Cloud is a genre film through and through, and while some of its dumb, most of it is just dumb fun, Liang, who co-write the script with Max Landis uses the Twilight Zone episode Nightmare at 20,000 Feet , while adding a little Ripley from Aliens for good measure. The film’s first half feels like every other World War II movie, but at about the half way point it takes a hard turn. From there your guess is as good as mine as to what’s going on, though at times baffling there are moments of just pure joy. There is no doubt that this is Moretz’s film, with her front and center the first half of the film, while the rest of the cast is only heard via a radio. It’s had to talk about this movie without giving too much a way, but just know this, it’s a movie with a female lead that kicks ass and takes names. This movie would have played great with a crowded house, but still is enough fun that you will find yourself laughing out loud with no one else around. Shadow in the Cloud is far from perfect and has its moments of head scratching, but after it is all over if you are anything like me, you will find the film quite endearing.