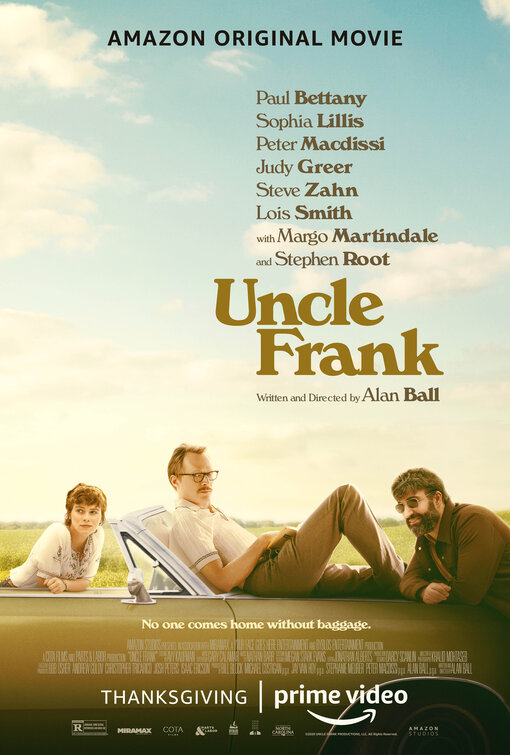 A few years ago when Green Book came out I felt like it was a story told by people who wanted to make themselves feel better about the past. The film felt like it was told through rose-colored glasses and about a world we wished we had been in instead of the world we actually were. Uncle Frank  treads some of the same paths, and like Green Book, the rosy story doesn’t take away from the performances, but does lessen their impact. What we end up getting, is a film about love and death in the most cliché’s of ways.

Beth (Sophia Lillis) is the family member no one really gets, well all except her Uncle Frank (Paul Bettany). Frank you see had left their small town in South Carolina for the big city of New York and when he did come home you could sense something had come between him and his father, Daddy Mac (Stephen Root). Flash forward four years and Beth is now attending the same school where Frank is a professor, as Beth tries to find her way around school she finds herself at one of Frank’s parties, where she learns the truth about him. It turns out that odd feeling between Frank and Daddy Mac comes from Frank being caught with a boy when he was sixteen. Beth has no problem with it and when Daddy Mac dies she and Frank as well as Frank’s partner Walid (Peter Macdissi) hit the road back home. On the way, Frank and Beth are able to get to know one another better, but once home the wounds are reopened.

Uncle Frank is the latest film of Alan Ball to deal with the subject of death and family relationships, after American Beauty and the acclaimed series Six Feet Under. Ball just seems to be comfortable in this world, but in the case of Uncle Frank, the story is has more than a few familiar beats and plays like it’s the “safe” version of this story. It’s a shame the screenplay is lacking with such a fantastic cast, who are fully-fleshed out characters and Bettany and Lillis give stand out performances that will make you feel. The film for the first half has a lot going on for it, but it’s in that final act that it really fails to deliver, as it almost turns into a different movie with its all wrapped up nicely in a bow ending. There are plenty of things that you might not like with Uncle Frank, and what Ball does best as a writer is on full display in here. But it is without a doubt, the cast that makes this one worth the time.