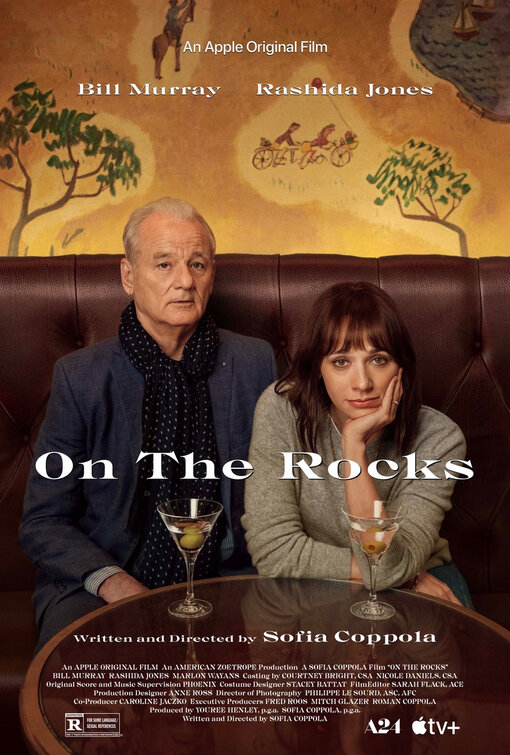 It has been seventeen years since Sofia Coppola and Bill Murray brought to the cinema world the ever so charming Lost in Translation. Coppola who has since then made a mix of period pieces as well as few LA centric ones has re-teamed with Murray in the light comedy On the Rocks, and it’s like the last seventeen years never happened.

Laura (Rashida Jones) is a writer who stays home with her two daughters as her husband Dean (Marlon Wayans) travels abroad trying to get a new company going. It is in a return from one of those trips that something feels a little off in Dean, with the discovery of a women’s toiletries adding to Laura’s questions. Enter Felix (Bill Murray), Laura’s eccentric father who is quite the charmer. Felix, being a man who has had his share of missteps starts to put in Laura’s head that Dean might be cheating on her with an attractive member of his team, because he is a guy and guys do that. Thus begins an adventure with her dad as Laura is encouraged to look into Dean’s suspicious behavior, which includes some spying. Things escalate when Felix convinces Laura to go to Mexico to finally find out once in for all what is happening all while spending some quality father daughter time together.

I have enjoyed most of Coppola’s work, but there is something about adding Bill Murray to one of her films that makes me enjoy them more. Murray who really makes any film he is in better, just has a special relationship with Coppola where they just complement each other. The charm of this movie goes beyond those two though, because without Rashida Jones, I don’t think we would have had the same film. She is great and her relationship with her father really is the heart in this story. Coppola knows that everything counts and you can feel all she does has a plan to it, even down to the wardrobe choices. That is a major plus in her films, as they have always added that extra element that is lacking in other films similar to hers. On the Rocks for me is the best thing she has done since Lost in Translation. It’s strengths are enough that you can forgive it for kind of missing the landing with an ending that feels a little different from where we started. I for one forgive the last act and embrace the rest of the film with open arms, because with Jones and Murray combined with Coppola’s skills, yes bartender, I will have another please.

May the Devil Take You Too