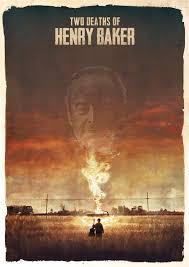 Everyone’s story is different, but some people’s stories just are a little more interesting than others.  Henry Baker (Gil Bellows) has lived a life on the wrong side of the law and his latest adventure has people looking for him. Henry has a twin named Sam Bird (Gil Bellows) and when said law come a looking, they find Sam thinking he is Henry.  Well they guessed wrong and when Henry comes home he gets the drop on those guys, who are cops lead by Sheriff Ron Chapman (Tony Curran) who want their own piece of the pie. The pie stays with Henry as he kills them all and leaves Sherriff Chapman with a scar that will always remind him of that night.

Henry doesn’t stop there as he also shoots Sam, and then with his son in tow, visits Sam’s wife and her son and gives them some of the bounty that everyone wants. Eventually Henry gets caught and goes to jail and those two sons grow up, not knowing of one another but both on the same path. Henry is released from jail and that is the beginning of a family reunion that no one wanted.

Two Deaths of Henry Baker is a really good modern western with its story of hidden treasure and shootouts. The cast has the silent, but deadly look down and give meaning to why you always should worry about the quite ones. The story written by Sebastian Pigott doesn’t have many flaws and really pulls you in. The problems the film does have might have come from Director Felipe Mucci in his choice of music drops during a couple of scenes that really feel out of place. Those drops serve as distractions more than anything, as they take you momentarily out of  the moment the story had put you. Bellows is great in his dual role and to be honest everyone else is playing off of him. This really had the makings of something great, but with its few missteps, some of the greatness is lost.  That though shouldn’t prevent you from kicking off your boots and still enjoying this one.