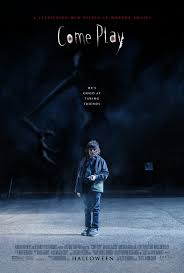 Today, tablets and phones are used to entertain kids and adults alike as they really are the perfect distraction. Maybe it’s all the apps or bright lights that beckons us. Or it could be a monster named Larry that is just looking for a friend. For Oliver (Azhy Robertson) he uses his device as a calming tool as he is autistic and not only uses his phone for that, but to also communicate, since he has trouble with his words. One night a story about a monster named Larry appears on his phone, telling the story of his loneliness and his want for a friend.

Oliver doesn’t sleep well that night and in the morning he is convinced by his mom Sarah (Gillian Jacobs) that it was just a nightmare. Things though still kind of get weird as lights go out and with the use of the camera on an iPad, Oliver can see something that is not human. Things hit a peak when he has a sleep over with some over kids and they read more of the story, which causes one of the boys to get hurt. It seems the story must be read all the way through and when it is, Larry can come into our world to take his new friend back with him. Screens and lights are broken as Sarah and Oliver’s dad Marty (John Gallagher Jr.) try and protect their son from the creature behind his screen.

The good thing about Come Play is you now have a great story to help cut down your kids screen time, based on this films ‘scream’ time. When your kids won’t turn off that tablet you can tell them if they don’t Larry will come get them. Come Play has some good technology horror sequences, but it never makes a case that Larry deserves a home with all the other boogey monsters in the world of horror. I will give writer/ Director Jacob Chase some credit with the birth of this idea and while it is a good idea, it doesn’t really produce many things to be scared about. For a movie that goes deep in its themes of autism and the social reliance on hand held technology, having not much to frighten you is not a good thing when that is what you showed up for. What Chase succeeds at is building up the tension, it’s just that the payoff is not as solid and the film should have ended five minutes earlier, because where it goes just doesn’t do it for me. Come Play looks like a horror movie thanks to cinematographer Maxine Alexandre and feels like one, but what it lacks is the heart of one. It is because of the things it lacks that brings it down in the end and what it does best is give you a story to tell your kids to make them put their screens down, so at least there’s that.