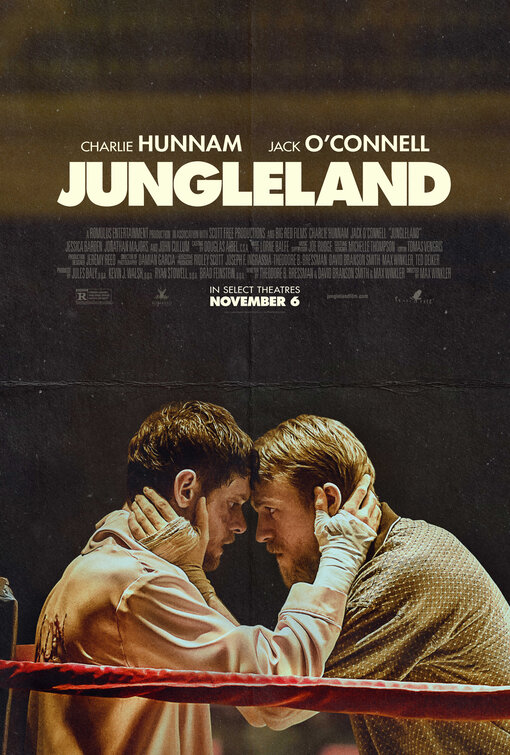 As you watch Max Winkler’s latest film Jungleland, you will realize that you are not seeing anything new when it comes to a boxing movie. What writers Theodore Bressman, David Branson Smith along with Winkler bring you is another story about a boxer whose life is in shambles, but want you to focus on the beauty of the unseen. It is with that thought that naming the film after an epic ten minute anthem by Bruce Springsteen makes sense as it feels like a song of his come to life, but with boxing at its center.

Stanley (Charlie Hunnam) and Lion (Jack O’ Connell) are brothers, but their lives are at different points. Lion is a boxer who has some talent and making it by at the urging of Stanley, who looks out and takes care of him. Stanley though is also bringing him down as he always seems to be in trouble. It is one of those situations with a man name Pepper ( Jonathan Majors), that causes Stanley and Lion to drive across country to fight in a bare knuckle matches to pay back Stanley’s debts. If I have learned anything in life, is you don’t mess with a man named Pepper and it is something Stanley seems to have a problem getting. Part of the deal also includes them delivering a girl named Sky (Jessica Barden) to a man in Reno, in one of those ‘no questions asked’ kind of situations. So they hit the road and it all starts out pretty smoothly, but things escalate quickly on the bad luck side as the relationships gets a little more complicated as the trip goes. Everything comes to a head when Lion finally hits the ring with Springsteen playing over the scene, with lyrics that sum up pretty well what you just saw.

Winkler who has made his name with some indie comedies like Flower and Ceremony, shows with this one he knows a thing or two about dramas as well. While the story is a little too familiar, the feel and the cast do enough to give the film a little something extra that you look for in a movie like this. As an actor, if you want a role with a little meat on it, there is not many better than playing the boxer down on his luck. O’Connell has the chops just for that and delivers as Lion, but its Hunnam and Barden who both give the film it’s heart and soul as they both try and put Lion on the path that they think is best for him. It would have been easy for this to be just another movie about a boxer, but the cast overcomes the stories shortcomings and delivers something worth watching. I wanted to be more behind this, and while I did enjoy it enough, Jungleland could have been a contender, but ends up picking itself up off the mat most of the time.

The Dark and the Wicked