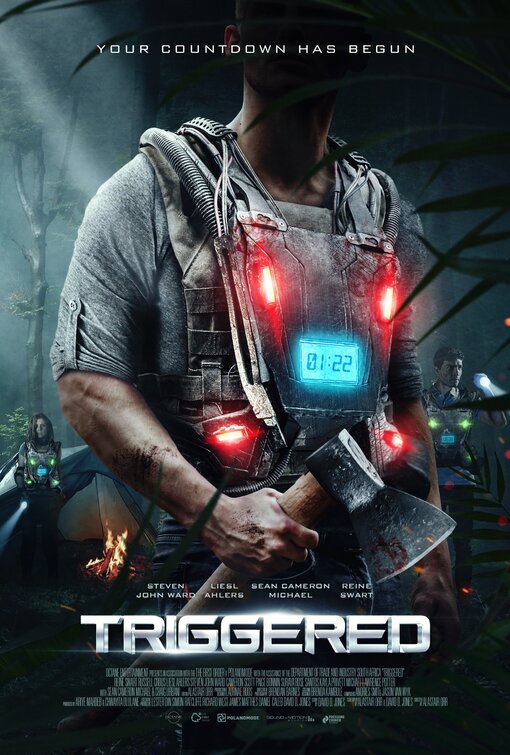 Thinking back to High school and the friends you would hang out with, I am sure you could come up with some pretty fond memories. You would remember how you would do anything for them, but like so many other things, time can change that. What time does is creates rifts and when a situation comes around that will test your friendship, like someone strapping a bomb to you and all your friends. Yes, this will show you who your true friends really are.

For this group of pals they are led by Bobby (Michael Lawrence Potter) who decide to camp out in the woods before the big football game the next day. Everything seems like a normal night but when they awake in the middle of the night confronted by their old science teacher, things are about to get explosive. The teacher, Mr. Peterson ( Sean Cameron Michael) , son died some years ago at a party with this group of friends and now he wants them to pay. So he straps each one with a vest with a timer and a bomb and the game is there can only be one survivor, but if you kill someone else, you can get their time. No one wants to kill their friends right? Well after the initial confusion, the asshole comes out in Kato (Russell Crous) as he starts to try and pick people off with his girlfriend Amber (Paige Bonnin). While they are plotting who to kill next, the rest of them, Rian (Reine Swart), PJ (Cameron Scott), Erin (Liesi Ahlers), and Ezra (Steven John Ward) try to figure out what to do next, with no plans to kill. Things though get wild, as secrets give motive and pretty soon the situation as well as people blow up, leaving a mess and maybe only one survivor.

I am not going to lie, Triggered had me at bombs strapped to peoples chest. Now that it had my attention, would it be able to keep it? For the most part it is a simple, “your friends are not your friends” kind of movie, but it also is pretty predictable and cliché. I mean it doesn’t take long to figure out who will be in on killing and who would not. In fact everything pretty much points from the beginning who will be the last one standing. With that said writer David D. Jones didn’t seek to win an Oscar with this film, but he does deliver something kind of fun. While the story might go how you thought it would, it is still enjoyable to watch and if you accept it for what it is, then it’s easy to forget what the film lacks. Triggered  can be a dud at some points, but when it’s at its best, it can be quite explosive. I hope I never get put to this kind of test, but I sure had a good time watching this group go through it.