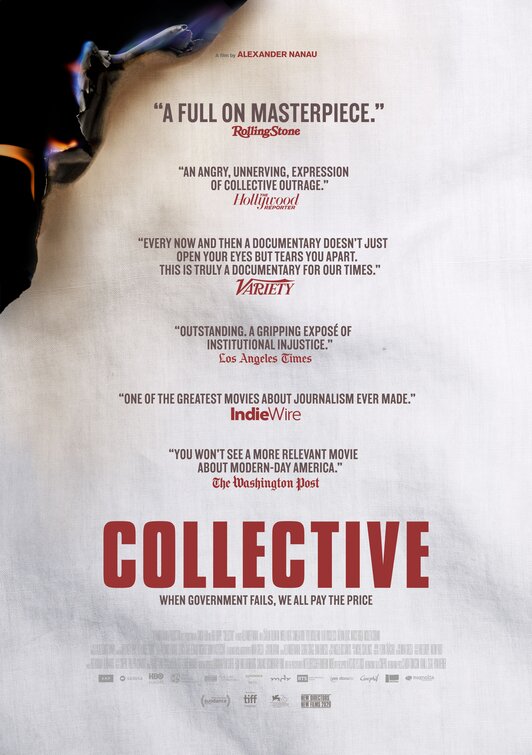 On October 30th, 2015 a fire broke out in a Romanian nightclub, killing 64 people and injuring 146. The fire was a tragedy, but of 64 people who died, only 26 died on site, the other 38 died in hospitals, where the real crimes were happening. Collective is not a film about the deadly fire that ravished so many lives, but about Romania’s Hospital system, that thanks to some investigative reporting, was discovered to be corrupt and responsible for more deaths than the fire.

Catalin Tolontan  has been one of Romania’s top sports journalists, but it is his breaking of this story in The Sports Gazette that earned him his wings. Tolontan discovered that hospitals were illegally diluting disinfectants that lead to patients contracting forms of bacteria that would lead to their deaths. Some of those disinfectants were up to ten times lower than stated, which were used for surfaces and hands that were possibly incapable of killing any kind of hospital bacteria. Tolontan’s story caused the Mister of  Health to resign and was replaced by a once patient’s advocator, who would soon discover how deep the corruption would go.  This is a documentary about the importance of the press and the power that it can have when it is done for the right reasons.

The story presented in Collective is incredible to watch unfold for so many reasons. The first part of the film mainly focuses on Tolontan’s investigation in which he doesn’t just stop with the discovery of the disinfectants. Tolontan also discovers corruption at the deepest levels of government and watching him do so is journalism at its finest. Director Alexander Nanau doesn’t just show the heroic behavior of Tolontan, but also the journey of Vlad Voiculescu , who becomes the health minister to a system that is rotten to the core. Watching Voiculescu try and solve problems with common sense solutions only to have one red tape wall after another put in front of him. I have never seen a documentary that shows the true mechanism of government and how difficult it is to make changes.

This is an incredible watch and one that anyone who wants to become a journalist or a public servant should watch and belongs in the conversation with films like Spotlight and All The President’s Men. Sure those films are a narrative take on real life stories, but with Collective you get to see the real players in action. This is a film that reminds us of the importance of the fourth estate and what can happen if it is not there to keep the ones in power in check.  It is also an inspiring look at people doing the right thing for the right reasons and how the press can not only shine a light on but help those that can be easily forgotten by the powers that be.