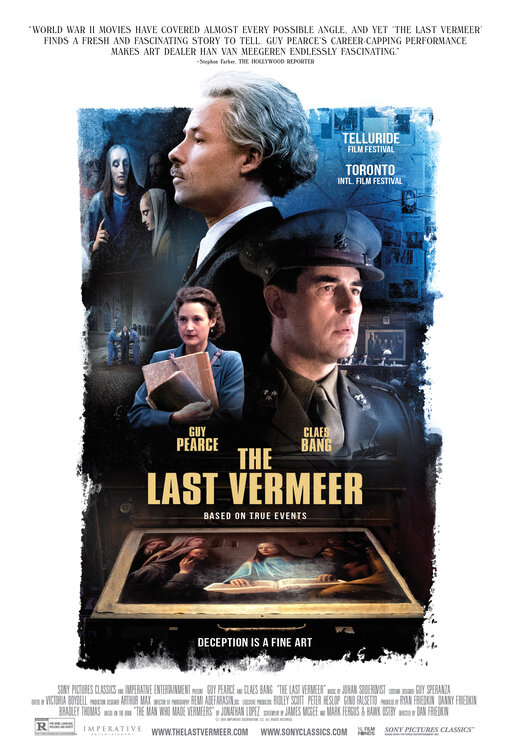 The after effects of war can really bring out the good and evil of the people who were impacted the most. As the smoke clears on who won or lost, there are people who need some sort of justice and look for people who they felt like were traitors to their own. After World War II people wanted blood from those who were seen as helping the Nazis and in a lot of cases they got it. This though is not a story about such a thing, no instead this is a story that reminds you that sometimes the truth is not what you think it is.

Captain Joseph Piller (Claes Bang) was a member of the Dutch resistance and now that the war is over he is investigating people who were believed to be Nazi sympathizers. It is after a box car of stolen art is found that he is led to Han Van Meegeren (Guy Pearce) who is the man who sold some of that found art to members of the Nazi army and now people have questions. Captain Piller is not the only party interested in Van Meegeren and the clock is ticking as the Allied occupation is coming to the end, so is his authority to get to the truth. Van Meegeren is sent to prison to await his trial and Piller retires to a regular life. The truth though soon comes to light and Piller goes from prosecuting Van Meegeren to defending him, as there is more to this story than what appears on the surface.

The Last Vermeer  is a revealing look into one of the more interesting stories to come out of the second world war, that didn’t involve a battle. Written by a team of writers from Jonathan Lopez’s novel The Man Who Made Vermeers, a story with quite a turn. The first third of the movie moves at a snail’s pace, but once Van Meegeren enters the picture, he brings the story some life. Pearce, who plays him, makes him one of those guys you enjoy being around, even though you might not like him very much. It is because of that you wish this was a story more about him and not about the guy who was investigating him. This film though is a fascinating look into the world of art and the value that is placed on the most sought after pieces. For this version though the focus is not on the art as much as these two men who both got recognized for their efforts during the war. I am a sucker for stories like this and while I did enjoy it, it never ascends to a place of greatness, and instead falls well short of being a masterpiece.