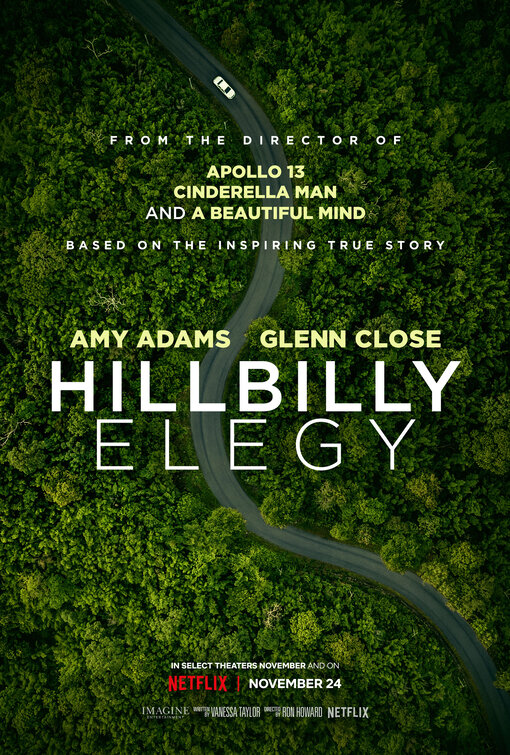 It you are one of the many who have read  J.D. Vance’s novel Hillbilly Elegy then you are quite familiar with  what this story is about. I am not one of those who have read it, so for me I am going into this with eyes wide open, knowing very little about what I am about to see. What I do know is it is about family and making something of your life when all the odds are stacked against you to do that. That of course is the simplest explanation but after spending two hours watching this film, I know is not that simple.

J.D. (Gabriel Basso) is working three jobs as he attends Yale Law School. This is a long way from where he came from, which was Middletown, OH and the life he lived there. J.D. was raised by his mother Bev (Amy Adams) who was not the picture of stability. While she at times was a good mother, she would also fly off the handle at a moment’s notice. Bev was not the outlier in the family, but more of the normal. Bev and her parents had come from Breathit County, Kentucy and brought with them the traits of loyalty and family with them. Her Mother and J.D.’s Memaw (Glenn Close) was a woman who was tough as nails and when Bev starts to have problems, takes J.D. into her home so that he can become the best version of himself. J.D. does make it out, but on the eve of his interviews for a clerk position at a law firm, his sister Lindsay (Haley Bennett) calls him to tell him that their mother has had a relapse. J.D. is stuck between two worlds and he must decide which one he needs to be in before it’s too late.

Having not read the novel, I don’t know how the story is told in the book. In the film though, screenwriter Vanessa Taylor chooses to not to go linear, but decides to have the narrative bounce around though Vance’s life. The result it makes the story feel dysfunctional and lessens the impact of some of the stronger moments. Vance’s novel is about how he made something of himself despite where he came from, but the film version feels like it’s telling you , “see he did this, so why can’t you?”  and not in a subtle kind of way. While you would think having Ron Howard as your director would be a plus, his sunny disposition just feels kind of wrong for the story that is being told. Where Hillbilly Elegy does get it right is in its performances, led by Close and Basso, who is really good as Vance. Adams, who is always on the money is good as well, but her performance is hurt by the choppiness in the story telling. Hillbilly Elegy will resonate with some people, because of what it’s about, but for me it just feels it’s trying too hard to be a “one size fits all” film, and even with its broad strokes it still manages to miss the canvas.