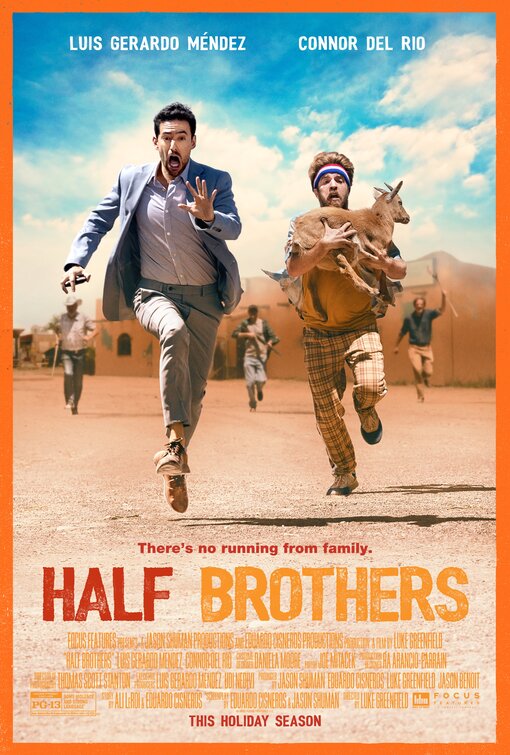 When you feel the need for a road trip, one of the essential things you need is a map. How else are you going to get to where you are going? Movies involving a road trip with a couple of friends also uses a map, but in this case it’s not just to get where they are going, but also how they get there. It is easy to say once you have seen a movie like that, you have seen them all, because while the characters might change, a lot of what happens stays the same and Half Brothers doesn’t stray too far from that formula.

Renato ( Luis Gerardo Méndex) is a successful man in Mexico who seems to have it all. He owns his own company and is about to marry the woman of his dreams, but for all it seems that he has, he is also missing something. That something is a relationship with his father, who when he was younger left for America to find a job, but to never come back for reasons that Renato does not know. That starts to change with a phone call from a woman claiming to be Renato’s father’s new wife and that he is on his death bed and really wants to see Renato. Of course it is not easy to want to see the man who abandoned you, but with a little push from his soon to be wife, Renato heads to Chicago to grant his dying father’s wish. Once he is there, Renato has little time for his father’s excuses or promises for everything to be revealed. As the only info he has is a letter addressed to someone and a new half-brother in Asher (Conner Del Rio). Things are not going well for Renato, as he doesn’t really want to solve his father’s riddle or spend time with his new brother in doing so. Reluctantly he agrees to go, hijinks  ensue and they even pick up a goat along the way, all to get the answer that has eluded them both about the father that brought them together.

Two people on the road where one doesn’t like the other, only to come around at the end, stop me if you have heard this one before. Filled with cliché jokes, from the only thing is Mexico to do is to zip line, or that American’s are just lazy and fat, Half Brothers is not trying to be original, it’s just going for the laughs. While that happens some, when you are a comedy it probably should happen a lot more often. Where it lacks in laughs, it does gain in heart as the story has enough that, so the only tears you might expect won’t be ones from laughter. There is no gross out humor, instead this is a film you can take the whole family to, just don’t expect everyone to enjoy. Originality is not what is being aimed for here, but when you are not original, nor that funny, that kind of takes away any reason to spend your time on it. So do not take this road if you want something fresh and new, no matter how well traveled, this one is just not the most scenic route out there.