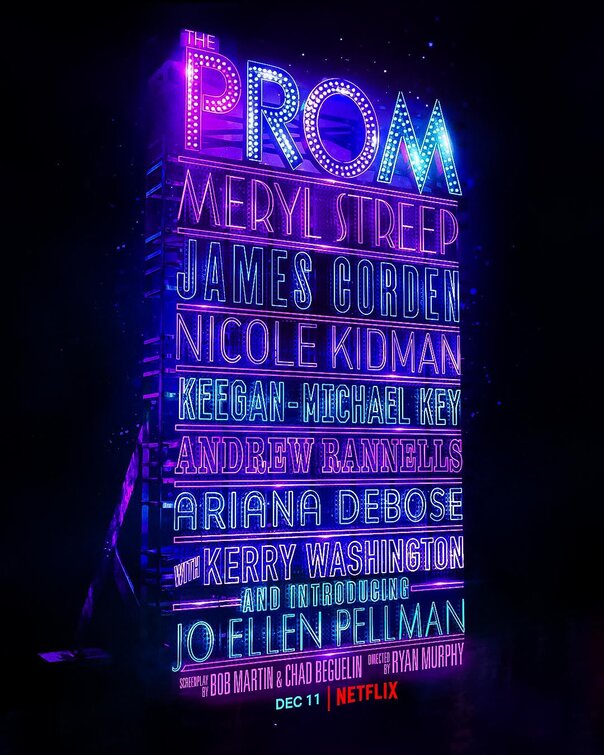 As someone who never went to prom I have never understood the appeal for it. Movies though have shown us all the cool things that can happen at prom. So it is safe to say that me not going to prom set in motion where I will be in life. For Emma Nolan (Jo Ellen Pellman) she really wants to go to prom, but because she is gay the PTA, led by Mrs. Greene (Kerry Washington) , is cancelling prom altogether to ensure she can’t go. With not many people on her side on her small Indiana town, her story catches the eyes of a group of celebrities who think she is the answer to their own problems.

Far from Indiana and pretty much on a different planet, a Broadway show is premiering and flopping right after said premier. Its stars, two time Tony winner Dee Dee Allen (Maryl Streep) and Berry Glickman (James Corden) who are not the talk of the town and while sulking over that at a local bar, they come up with a perfect plan to save their careers, by helping someone else. So with a little help from Trent Oliver (Andrew Rannells) and Angie Dickinson  (Nicole Kidman), they take the show on the road and sing and dance their way into Indiana. Once there with the help of Emma’s only ally, Mr. Hawkins (Keegan-Michael Key) they set out to make sure Emma gets her Prom and in doing so become the stars they always think they were once again. Things though are not easy and along the way everyone learns a little about themselves, but the show must go on and things fall into place, which is perfect for one big song and dance finale.

If you are a fan of Broadway, than you are going to love The Prom. It seems that the new Christmas tradition is to get our dancing shoes on and to sing at the top of our lungs with some catchy tunes in this year’s hot musical. The problem with The Prom is that most of the songs are not that catchy and while some are good, most are forgettable, but they definitely did save the best for last. The cast though does the best with what they got, even if Director Ryan Murphy feels a little out of place with his heavy handed direction. Too often the story feels like a jigsaw puzzle, that not even the best song can put together. I love a good ‘song and dance movie’ as much as the next guy and this one with all it’s glitz and glamor feels like just what we need after the year we’ve had. The problem is no matter how you dress it up, there are just too many problems that the lights can’t hide. The last ten minutes though are fantastic, but with a run time of just over two hours it’s getting to that last ten minutes that can be straining. There will be people who love this, I am just not one of them, but at least it’s not Cats, so it has that going for it.