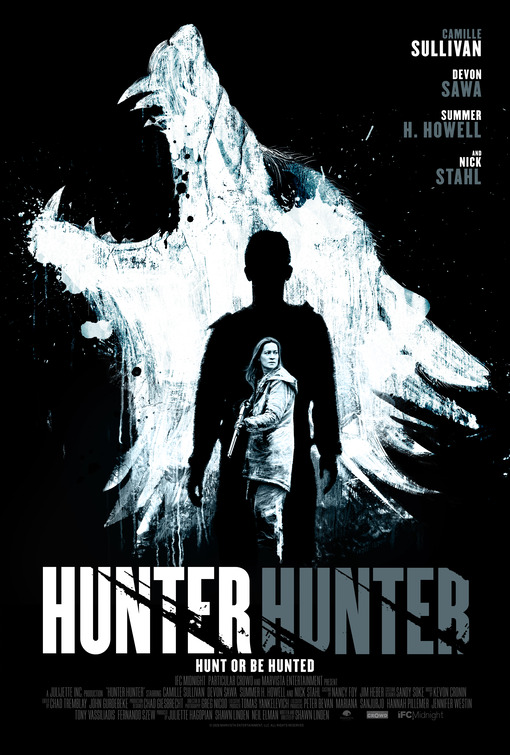 Almost anyone who lives in the woods is there because they are trying to escape something. For some it may be the hustle and bustle of the city, but for others it’s the only way to live. Of course while you get plenty of quiet in the woods, there are a few drawbacks. Like let’s say a wolf is stalking you and your family, in the middle of the woods there is no one close enough to hear you scream. You know, the usual. Mersault (Devon Sawa), his wife Anne (Camille Sullivan) and  daughter Renee ( Summer H. Howell) have made that choice to live in a cabin in the woods, and it’s a choice they might soon regret.

Mersault seems to have everything under control, he is a skilled hunter and knows the land around him pretty well. Anne is not quite as good, but capable, while Renee on the other hand is learning from her father and has picked up things pretty well. Everything seems quiet on the homefront, but there is something out there stealing their captured game and it has the markings of a wolf that needs to be taken down. Mersault gets his gear together and heads out to track the creature that is causing their troubles. He eventually finds it and after wounding it, he follows its blood trail to a site that is worse than  anything he has seen before. He returns home in a kind of shock and says nothing to his family, only to leave again in the morning with no clue when he will be back. Mersault returns to the site he found and comes to the conclusion he is hunting something far worse than a wolf and that he must do what he can to keep his family safe.

Hunter Hunter  is here to teach you that while living in the seclusion of the woods sounds like a peaceful existence, it really is not. Writer/ Director Shawn Linden delivers a film that will keep you on alert for just what might happen in the world that he created. While I was thoroughly prepared for what I thought I would see, the ending came at me fast and hard and left me in complete shock over what I just saw. Though it’s not just that the ending might leave you speechless, the rest of it is a quality horror film with a good performance from Camille Sullivan who delivers with the best of them. I utterly enjoyed what Sullivan did, but it was the last fifteen minutes that sealed the deal to me, as like the rest of the movie that is the peak of what you will see. You have choices when you want to watch a creepy movie that takes place in the woods, and even if Hunter Hunter might not be the best of them, it definitely will leave its mark on you.