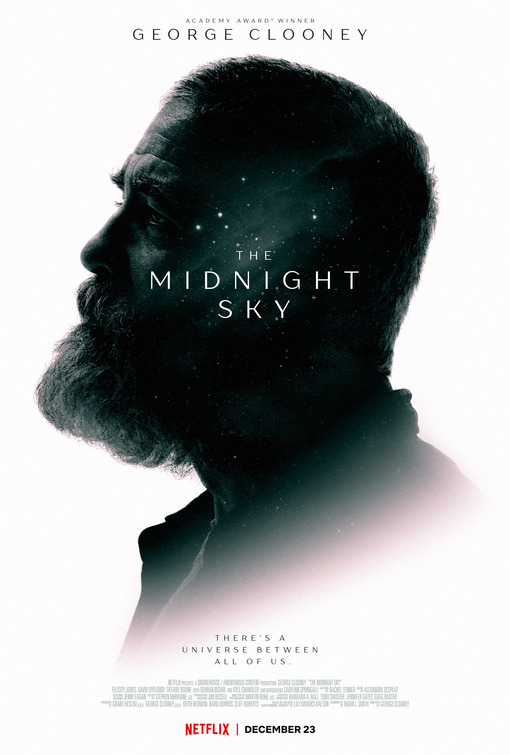 Sci-fi films are one way of reaching for the stars with our stories, and like most of them they either involve conflict or utter serenity. With George Clooney’s new film The Midnight Sky the approach is more 2001 than  Star Wars and while it reaches for the stars, the landing comes in a little rough. For as rough as things get in the end, 75% of the film is a marvel to watch as this film might just be the thing to remind you that sometimes it’s not about the destination, but the journey.

Augustine (George Clooney) is a man on his own at the ends of the earth, who might just be the last person alive, as far as he can tell. Stationed in the Artic with what can be a terminal condition if not cared for, Augustine decides to stay as everyone else leaves to try and survive. While chaos is raging on earth, a crew is returning home from the discovery of a new planet that humans can settle on. The crew consist of  Sully ( Felicity Jones), Mitchell (Kyle Chandler), Maya (Tiffany Boone), Sanchez (Damián Bichir), and Adewole (David Oyelowo), who know nothing of the events that have unfolded on Earth. That’s where Augustine comes in, as he is trying to reach the ship to warn them to what they are returning to. While he thinks he is alone, Augustine soon discovers a little girl names Iris (Caoilinn Springall), who seems to have been left behind. He does his best to care for the girl, but their comfort level is about to change as Augustine realizes that they will need to travel to another location so that the space ship can hear them. Together that brave the elements and make it to the station and get in touch with the ship and to warn them not to come home, and while they might have save the crew, it might be too late for themselves.

There are some slight problems with The Midnight Sky, however no one can argue against how beautiful it looks. Under the steady hand of Clooney and the eyes of Cinematographer Marin Ruhe, they deliver a looker of a film. Those are the elements that drive the film which Mark L. Smith adapted from Lily Brooks-Dalton book Good Morning, Midnight. It also keeps the dialogue few and far between. Too many words though would take away from the sights and sounds, or what really makes this film go. For all that it has going for it, the end is where the film starts to fall apart, as revelations are made that really took me out of the zone the movie has spent its entire run time putting me in. Where you are hoping for answers you are left with a piece to an incomplete puzzle. The ending really let a lot of the wind out of the film’s sails and for me kind of left me stranded with nowhere to go. I wanted to love this, but what I ended up with is a film that instead of being a new classic, turned into a pumpkin at midnight.