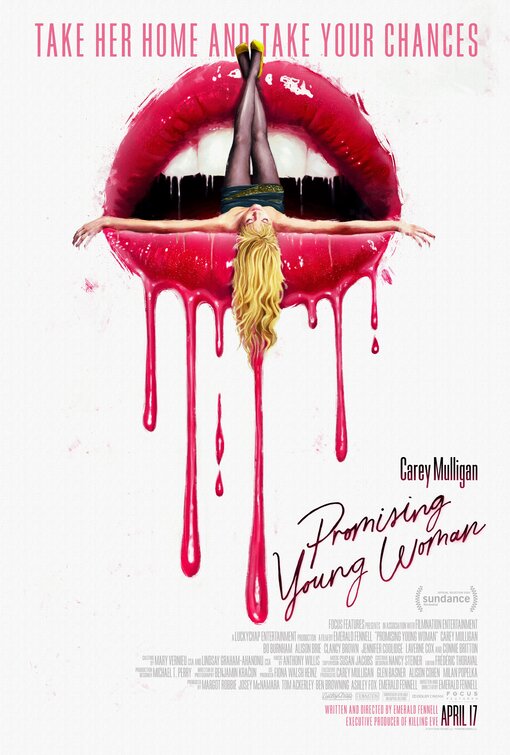 Most films that I watch leave little to no imprint on me, but that is because so many of them just blend together. There are those film that stand out though and stay with you long after the credits have faded, or how I call them, the stuff that dreams are made of. That is what a good movie does to you, it engages you and leaves you thinking about it in ways you might not thought were possible. Promising Young Woman is one of those films and not only will it leave its mark, it’s also manages to be highly entertaining along the way.

Cassandra (Carey Mulligan) at one point had her whole life in front of her and was well on her way to fulfilling her dream of becoming a doctor. Sometimes though things don’t go as planned and after something horrible happened to her best friend Nina, Cassandra’s life got a new meaning. Cassandra would go to bars and act like she was extremely drunk at which some nice guy would then come in and offer to make sure she was safe. The word “safe” to them would often mean to take her back to their place and attempt to have sex with a woman who could barley stand up. That though is where Cassandra flips the script and would reveal what was really going to happen. Her plan is going along well until she meets Ryan (Bo Burnham), who went to Med School with Cassandra and after much wooing, convinces Cassandra to go on a date with him. Things get off to a bumpy start but they find a comfort zone and a place Cassandra hasn’t been to in a while. It is then when the past comes back to haunt her and it is safe to say it’s going to leave a mark on a lot of people’s lives when all said and done.

Promising Young Woman is quite simply put one of my favorite movies I have seen this year. There is no hiding what this story is about, but even with going in knowing what you are about to see doesn’t prepare you for what you get. The way it made me feel was like going into a convenience store to buy a coke and walking out with a million dollar scratch off ticket. Yeah, it’s like that. Emerald Fennell’s script is totally on point and to top it all off she also directs and delivers one hell of a stylish picture. For all the praise I can give the script and filmmaking, its Mulligan’s electric performance that brings it all home and seals the deal on the greatness that is this movie. I couldn’t take my eyes of what I was seeing and by the time the film ended and I scrapped my jaw off of the floor, I still found myself consumed by what I just witnessed. This so lived up to its promises, and in a year where films like this are scarce at best, I’m glad to report that there is still incredible work out there to see. So seek this one out.