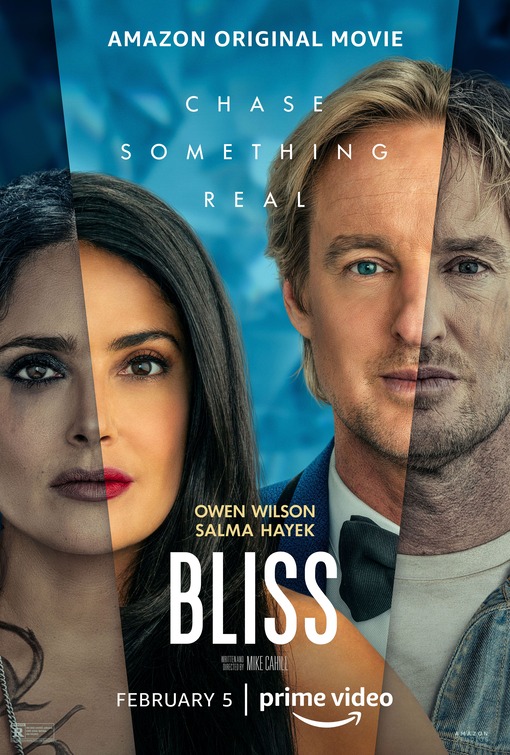 It is always an interesting conversation to have with someone when you ask them if they would have taken the red or blue pill, the choice the characters from The Matrix were faced with. That question of course refers to would you rather live in the world you are shown, or wake up to the real world, in that movie’s case, a world that is dirty and a shell of what we know as the world now. Mike Cahill, who is familiar with those kinds of questions with his films about duplicate earths and eyes being windows to the soul. In his latest, Bliss he dives into similar territory, as he asks what if the world we lived in wasn’t real?

Greg (Owen Wilson) is not in a good place in life right now. He is recently divorced, and is often in a daze at work, where he draws instead of doing the job he was hired to do. Things are about to get worse for Greg, as his boss has noticed his lack of productivity and has decided to fire him. In the midst of him being let go, an accident occurs and Greg panics and hides in a bar across the street. It is in that bar he is going to be given a wakeup call from a woman named Isabel (Salma Hayek), who tells him that the world around him is not real. Isabel you see has the powers to make things happen, like making someone trip, or making a tray to fall out of someone’s hands, but with Greg she can’t do anything to him, because like her, he is real. With that info and by helping him get out of the mess he was in, Isabel is able to convince Greg of her truth and together they retreat to her home. Those powers though are not a gift, they are instead the result of some yellow crystals that they must take in order to be able to do those things. It’s not just about being able to manipulate the world around them, Isabel eventually convinces Greg to take some blue crystals, which would wake them up out of the simulation they are currently in. Greg is taken by both Isabel and this other world, but he must make a choice of what world he wants to live in, as he tries to figure out what is real and what is not.

Bliss might share an idea with The Matrix , but that is about the only similarity. First off The Matrix is good, as with Bliss, twenty four hours after I saw it, I am still trying to figure out if there is anything I even liked about it. The script, written by Cahill, who also directed the film feels discombobulated and the story never really grabs me. It seems as though he has taken a step back from his heady concepts and attempted to go more mainstream which takes away from the film as a whole. Wilson and  Hayek are both fine, but given the material, which is presented as a love story, which was the feeling I had when the end credits rolled. If titles were meant to reflect how a movie might make you feel, Bliss  is the wrong title. Instead in my eyes, a better title might have been Bored, because that’s what this movie made me feel the most.