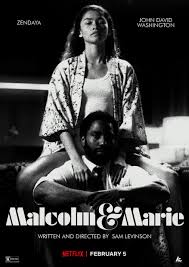 The stage is set, somewhere in Malibu, California a couple is returning to their rented home after an eventful night for one of them. That couple, Malcolm (John David Washington) and Marie (Zendaya) are celebrating the premier of Malcolm’s new film which drew comparisons to the works of Spike Lee, Berry Jenkins, and John Singleton. It is around one in the morning and Malcolm wants to echo the praises that was laid upon him not long ago and enjoy a bowl of Mac & Cheese that Marie has so graciously made for him. Things though are just beginning as we are about to take a deep dive into this relationship.

It starts with a shot fired across the bow, with Marie mentioning how it made her feel when Malcolm neglected to thank her among what seemed like to her, a thousand other people. This is just the beginning of a night of back and forth, in which each of them seem to go for the final blow only for them to both retreat back to the love they both undoubtedly share. It seems in Malibu, no one can hear you scream, especially when you are in a house that seems to be in it’s own zip code judging from the land around it. This night though is not just about Malcolm and Marie, it is also about Malcolm and his film and also the critics who are set to review said film. When Malcolm is not going at Marie for the way she makes him feel sometimes, he is turning his attention the critics who want to make his film about race, instead of just a story about a woman and her addictions. With such precise arguments, you start to wonder is art intimidating life or is this just a coincidence and nothing more.

A film like Malcolm & Marie  is an actors dream, just you and another actor both monologging at each other. Sam  Levinson (Assassination Nation), who wrote and directed the film, really set the table for  Washington and Zendaya to shine, as the only other character they have to compete with is the house they are in. The house, which is full of windows and an open floor plan allows the actors to more freely around as Levinson fluidly follows them often through the space. There is some great scenes between the pair and you can really feel the chemistry that they share. This movie has a lot of beauty in it, everything from the cast to the house to the choice to film it in black and white, everything is super easy on the eyes, which makes watching a film that is basically two people auguring for almost two hours easier to absorb. I am not trying to sum up this as the “argument film”, as what the couple say is equally as important as how they say it. What I will say is that this feels like a “movie” relationship which takes out some of the punch in what they are saying. Overall I did enjoy Malcolm & Marie, even though it wasn’t what I was hoping it would be. What you do get is some great actors who are on the top of their game and with a film that looks gorgeous, it’s enough keep you engaged and there til the end.