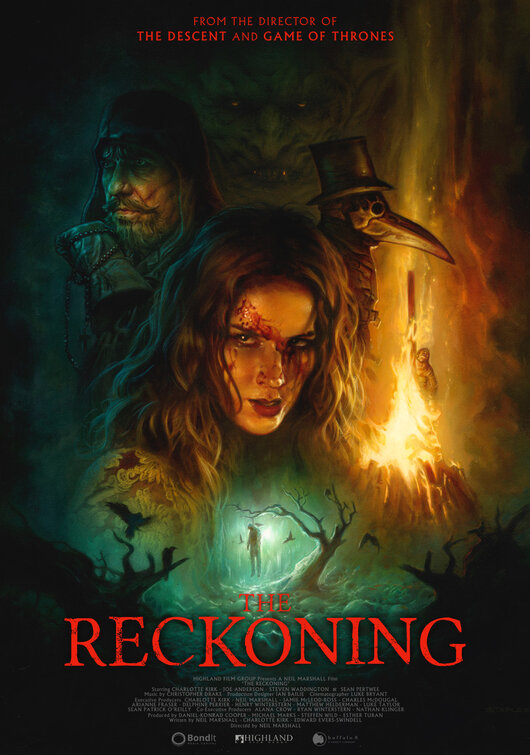 England in 1665 was not the time or place to be, especially if you were a woman. As the plague made its way through the population it didn’t take much for a woman to be accused of being a witch and thus burned at the stake. This was a common practice in both Europe and North America, where an estimated 500,000 women were killed after being suspected of being in cahoots with the devil. None of that sounds like a good time, but it does sound like a good place to set a horror movie, and director Neil Marshall (The Descent) has decided to bring it to the screen.

Grace Haverstock ( Charlotte Kirk) is a happy wife with her husband Joseph (Joe Anderson) and their infant daughter. Their lives though are torn apart when Joseph gets sick and instead of putting his family at risk he ends his own life. Grace though is not a feeble woman who relies on a man to help her get through life, she intends to carry on and provide for her and her child. Things though get tough when the Squire (Steven Waddington ) demands she pay her rent and when she can’t, The Squire offers to give her a way where she would never have to worry about rent again. Grace refuses that preposition and when she fights him off, he decides to get back at her buy accusing her of witchery. This of course gets the town all riled up as everyone gets ready to watch another witch burn. Grace is of course tortured in many excruciating ways, but she will not break, as well as never look like woman who had no more than a hard day cleaning the house. No, Grace will not go quietly into the night and eventually she gets the upper hand, which does not bode well for her accusers.

After being disappointed in how his version of Hellboy went, Neil Marshall has returned to his roots of a lower budget horror film to make things right. Written by himself as well as Charlotte Kirk and Edward Evers-Swindell, The Reckoning tried to put a face or two to those many woman who were killed back then. That though is about the only good thing about this film and really it was more of a gesture, if that. The Reckoning succeeds in having that low budget feel to it in an old network TV movie kind of way. Inexpensive I can handle, what I can’t take is a bad story and some of the acting choices that were made. Add to the fact that for a woman living in 1665, Kirk looks like she just got off the cover of a magazine, which doesn’t really fit in with the rest of the time and place. Plus the other things that happen in the film had me thinking that maybe all of that was intentional and this was all meant for a laugh and not to scare you. And if that was the case, unfortunately they don’t accomplish in that regard either. For me there is nothing here to like, except what might be the best death by a wagon, but as for the rest of The Reckoning it just felt like watching it was a slow death.