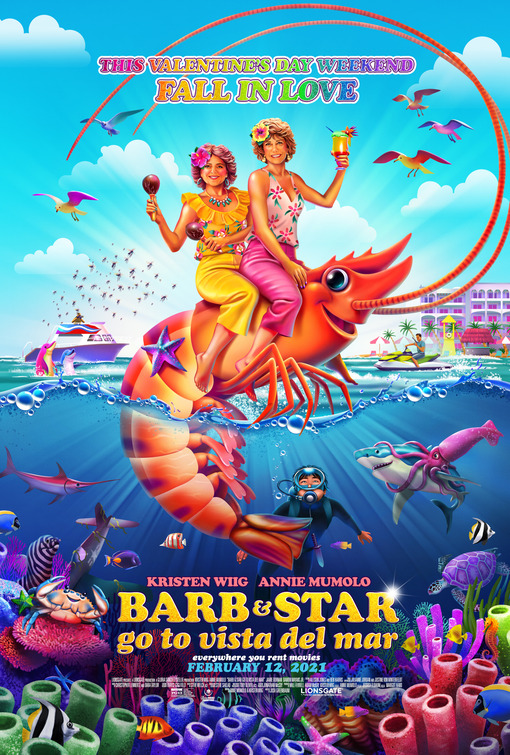 There is nothing like a great friendship. You know the kind of friend who is there for you through the good and the bad, as well as when someone is trying to kill a bunch of people with deadly mosquitos. That is the kind of friend we all need to have, because if we did, we too might get the chance to have a movie made about us as well. Barb (Annie Mumolo) and Star (Kristen Wiig) are the friends who get to save the world, but still have a great time in doing so.

Star and Barb work at a furniture store, well work might be the wrong word, as they mostly just sit on a couch and talk. A lot. It turns out though that the store they work for is closing and a void is created, but luckily they run into a friend who suggests they visit Vista del Mar, because it is just the thing they need to get their glow on. So off to Vista Del Mar, there they meet a man named Edgar (Jamie Dornan), and proceed to have quite the wild night with him. Soon they are going behind each other’s back to see Edgar, because you know men, and as Edgar falls for Star, he starts to not want to do what he originally went there to do in the first place.

There has been little said about what Barb and Star Go to Vista Del Mar is about, other than it was written by Mumolo and Wiig, who also wrote Bridesmaids. The trailer was very vague, but that doesn’t matter because these two have created another film that will live for ages. This film is the ridiculous we need in our movies right now, as they channel their love for films like Airplane and Hot Shots!. While it might not be on the classic level as those films, it isn’t far behind as I found myself laughing out loud and wishing I had seen this with a crowd. There really isn’t anything this film is missing, and how could it since it has everything from a song and dance scene to Morgan Freeman as…well something (trust me on that one). Wiig and Mumolo do it all in this film and you can tell they had a lot of fun making it, which translates to fun for all of us as well. It’s been ten years since Bridesmaids and after that and Barb and Star I really hope it doesn’t take another decade for the next. Because this is the type of movie we are missing and you are going to want more Barb and Star in your life after this.

Judas and the Black Messiah

The Map of Tiny Perfect Things