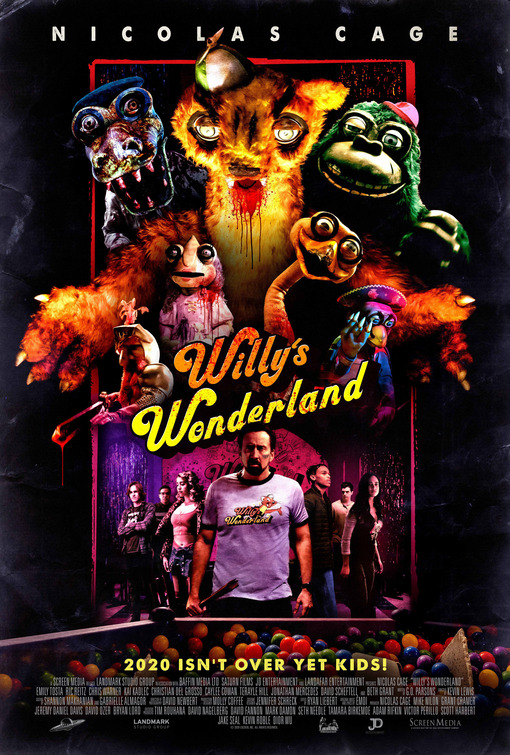 Sometimes you don’t need much encouragement to want to see a movie and it. For instance, one can get excited about a movie in just eleven words. Nicolas Cage vs. demonic animatronics in a fight to the death, need I say more?  This is one of those that you go into and buckle up and enjoy the ride, because that’s the reason for Willy’s Wonderland  to be on this earth, are you not entertained?

In one of those drive-thru towns that has no reason to stop is a place called Willy’s Wonderland. This place used to be the place to be, until it was found to have some pretty dark secrets hiding behind all of those birthday celebrations. A man driving through town encounters some car trouble and having no cash to fix it is given a deal that if he cleans up Willy’s Wonderland, then his car will be fixed free of change. The Janitor (Nicolas Cage) is shown where the supplies are and is locked in for the night to do some cleaning. Willy’s though has a secret, the animatronics that are there to entertain also have a taste for human flesh and The Janitor has been placed there to be their latest meal. This snack fights back though and soon The Janitor is breaking up the band, taking members out one by one. While he has everything under control, a group of kids lead by Liv (Emily Tosta) have come to burn Willy’s down and to save The Janitor before he is killed. It’s not him who needs saving though as The Janitor came here to clean up and nothing is going to get in his way of a spick and span building, not even a murdering animatronic weasel.

Now look, you are not coming to see Willy’s Wonderland  for its story structure or clever dialogue. No, you are going with the idea you are here to see some animatronics get their ass kicked by Nic Cage, who maybe says some great puns after a kill. Well if you came for the kills you are in luck, but as for some great kill lines, writer G.O Persons likes the strong and silent type. As for Cage he does not disappoint as he came to drink beer, play some pinball, and kick some ass and he does them all equally well and on schedule, none the less. This movie is crazy in all the good ways and will satisfy your “I just want to see Nic Cage be cool and take out some killer robots” itch that most of us have. I was excited the first time I heard about this movie and even more so after the trailer. Well it did not let me down and for all of you out there that love a good genre film, then it might as well be your birthday, because you get all the great gifts with this one.

The Map of Tiny Perfect Things

I Care A Lot