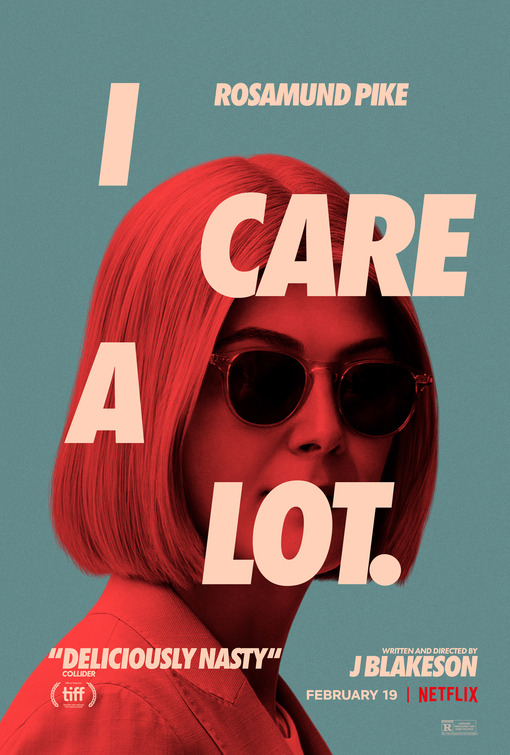 There must be something about playing someone who is devious that brings a twinkle to the eye of Rosamund Pike. Her portrayal of Amy Dunne in Gone Girl is still the best part of that movie and might be her best performance still, until… There is always an until and in J Blakeson’s film I Care A Lot, Pike gets to shine in all of those devious ways. Blakeson takes on the world of legal guardianship that might make you pause before you put anyone you love in an assistant living facility.

Pike plays Marla Grayson, a woman who has found her lot in life and that lot is taking advantage of a system that shouldn’t be that simple to do so. She, with the help of doctors find someone who would be easy for the picking, no family, owning a home, or just has money, and gets the system to work in their favor. This feels a little too real at times, knowing how our systems work, you could see something like this happening easily, which makes you not care to much for Grayson. After recently losing a patient who she thought she was going to be able to milk more from. Grayson is on the lookout for what she refers to as a “cherry” or in other words someone who has a lot that she can line her own pocket books with. You would think a film about someone taking advantage of the elderly wouldn’t be fun, but Blakeson keeps the film moving at an energetic pace as he introduces more characters and tribulations to the story. Characters like the “cherry” played by the always great Dianne Wiest or a lawyer with some interesting suit choices played by Chris Messina bring it. And it’s these characters that layer and add to the story with personality, but very little heart, as none of them are out to do the right thing. Part of that personality is in the wardrobe choices, and I Care A Lot owes a lot to costume designer Deborah Newhall who really comes through, especially with Pike making her look amazing as she ruins people’s lives.

Grayson finds her “cherry”  with the help of her assistant Fran (Eiza González), but she might have picked the wrong woman to take advantage of. The problem with bad people, is there is always someone worse out there, and Grayson happens to take someone that a really bad guy cares for. That guy is Roman Lunyov’s (Peter Dinklage) and he will not let anything get in his way to get her back. In a movie where you hope bad things happen to pretty much all the characters, you get to pick who you dislike the least if you want a winner and a loser in this game. Blakenson makes that hard as he really leaves you rooting for bad things to happen to pretty much everyone, but also gives you something great to look at in this stylish thriller. So you get Tarantino-esque characters and a Soderbergh stylization that adds up to a film has a lot in it to care about.