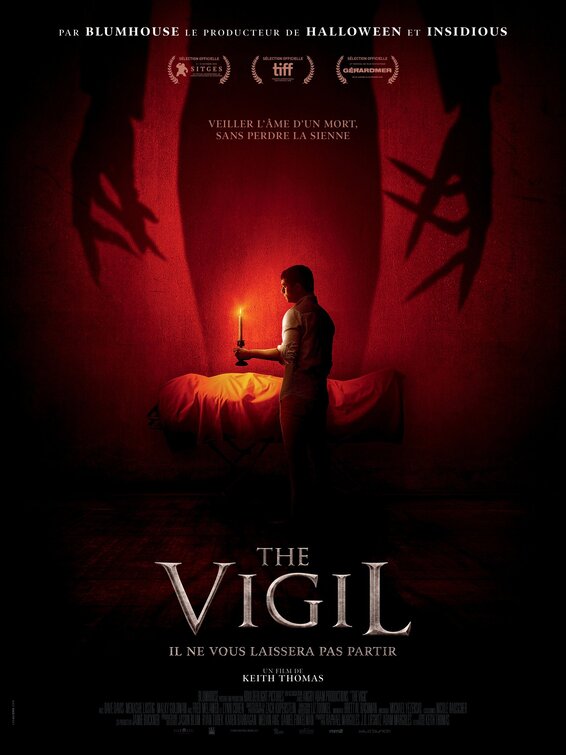 When you live alone for long enough you can sometimes hear noises in the darkness that make you feel you are really not alone. I am not anywhere close to being Jewish, but after watching Keith Thomas’s feature debut The Vigil that was the first thing I thought of. For those wondering what the title might be referring to “The Vigil” is a ritual that takes place after a member of the Orthodox community passes over. This has been something that has been going on for a thousand years, as a “Shomer” or watchman recites psalms to comfort the departed soul and protect it from evil.

Now if that doesn’t sound like a a setting for a good horror film, I don’t know what does and Thomas uses some good jump scares to remind you why you never watch a movie like this with the lights off. While you think you have it bad, Yakov (Dave Davis) has it much worse, as he has been asked to be a “shomer” for the night after the previous one dropped out at the last moment. Being short on funds, Yakov takes the job, but it doesn’t take long after his arrival that things start happening that makes him regret his decision. Davis who you might recognize form The Walking Dead or Greyhound really gives a strong performance as he is pretty much a one man act in the horror show. Davis doesn’t just have to put up with the things that go bump in the night, but the role of Yakov is also a pretty physical one as well. Everything starts off pretty well with Yakov’s time as the “shomer”, which says a lot since Mrs. Litvak (Lynn Cohen), the deceased’s widow remarks after seeing Yakov that he is not the one and that he needs to leave. He stays though, which is a decision he will go on to regret. Yakov starts to hears noises and starts to see things, including a scene with toenails that will stay with you all the way to your next trip to the nail-clippers.

It is the first half of the film that is the strongest as director Thomas uses the darkness and the quietness of the house to really test your scare level. It is only as the film gets into the second half and its climax that the jump scares become ineffective and over used. The Vigil is a story about this ancient Jewish ritual, but it also is a story about dealing with your own regrets or demons. Thomas delivers a good narrative, but one that feels like it would have been a better short film that was hurt by lazily filling in gaps just to turn it into a feature. That is not to say this is not a good film, because between the first half of the film and Davis’s performance that is enough carry some people through. The Vigil  is definitely worth a viewing and it is best watched with the lights out, and maybe with some noise canceling headphones on, just don’t stare at the darkness too long, you might see that there is really not much there.